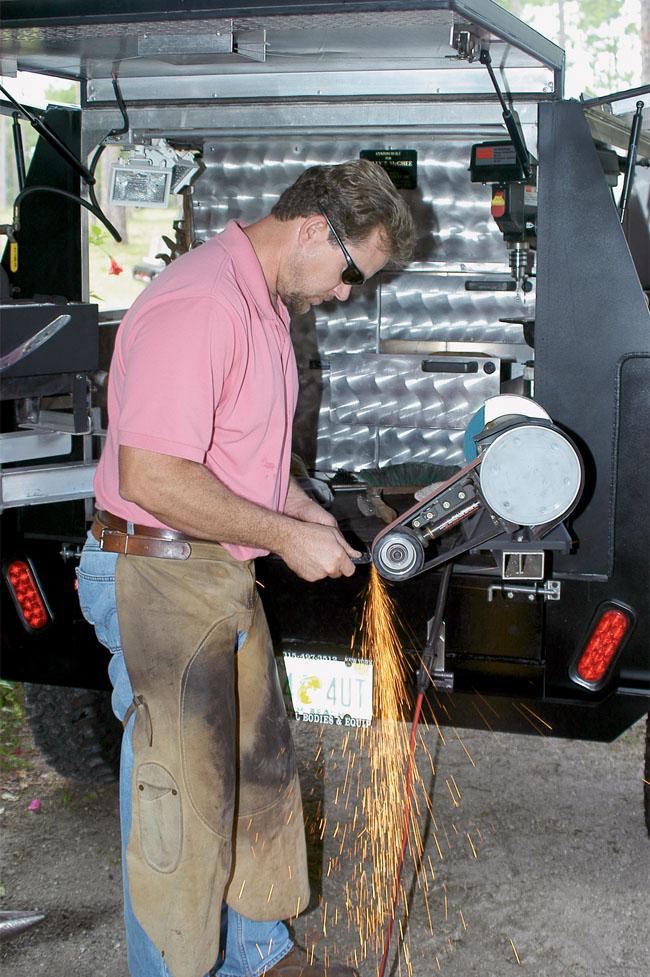 By Pat Tearney posted on March 1, 2007 | Posted in Education

Kelly McGhee works hard at his shoeing, but is neve­r too busy to credit his mentors

SAFING THE SHOE. McGhee safes a shoeing using the swing out grinder on his trailer before nailing it on a hoof.

Kelly McGhee is one of those farriers who’s not really sure just when he first helped shoe a horse.

Growing up on a ranch in Idaho, McGhee­ was already helping his stepfather, Jon Bast, shoe horses before he was 10. He recalls life in Idaho as a pretty hardscrabble existence, in which he and just about everyone he knew worked long hours to help their families make ends meet.

“You’d see farrier rigs with snow plows mounted on the front, so guys could make some money plowing snow,” he says. “People would train horses, raise crops, anything they could do to make a little extra money.”

Not surprisingly, McGhee didn’t see himself growing up to be a farrier.

“I grew up around horses and I was fine with horses,” he says. “But I didn’t see myself spending my life shoeing horses. It was just a way to pick up some extra money — even when I was in the Army.”

You don’t have to spend much time around McGhee to figure out that he’s not afraid of a challenge or exploring new things. Following high school, he joined the U.S. Army and served as a cavalry scout. After finishing his hitch, he went to Australia, where he spent 9 months working his way around the country and seeing as much of it as he could. He spent the final…