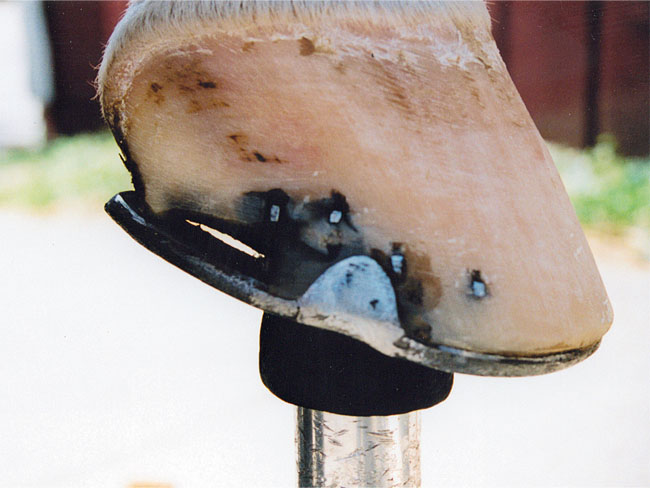 By Ron Perszewski posted on April 1, 2007 | Posted in Nutrition

Copper peptides have been used in cosmetic and medical products for years, and now they are also being put to use for hoof repairs

HEALING AND GROWTH NEEDED. Copper peptides combined with good nutrition can go a long way toward restoring damaged hooves, according to researchers with SBS Equine Products. They “switch on” the cells at the coronary band to draw the nutrition they need to refuel from the blood supply for faster healing and growth.

A new, spray-on hoof repair product based on human health and skin care chemicals is being offered to the hoof-care industry.

Richard Shakalis, an SBS co-founder and researcher, notes that proteins are the essential building blocks for human and animal tissue, including muscle, bone, hair, ligaments, tendons and fingernails (or in the case of horses, hooves). He says peptides are identical to proteins in that they are composed of amino acids.

“Peptides are usually found inside cells in many forms and act as antibodies, hormones or cell function facilitators. Copper peptides are a specific type of peptide that has a copper ion attached to it and is found naturally in cells. In this form, copper peptides act as signals at the cellular level to ‘switch on’ cells in several significant ways,” Shakalis says.

This is not the first time that SBS, based in Naples…

A Handy “How-To” For Hoof Health