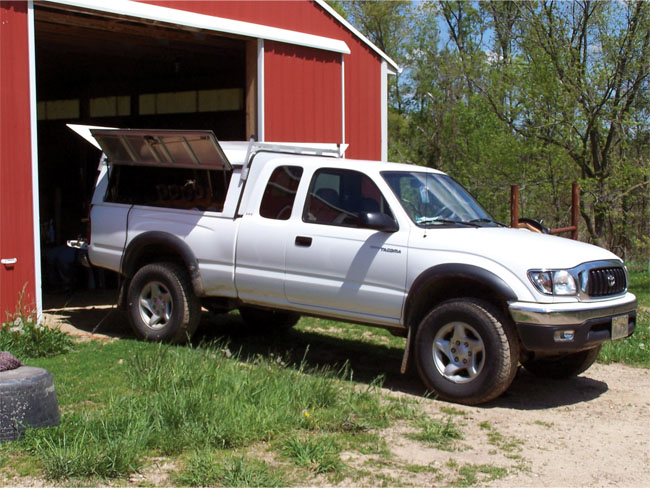 By Jeremy McGovern posted on March 1, 2009 | Posted in Equipment

Working with horses in central Michigan, farrier JD Pepper loves a challenge. When a sore back forced him to temporarily give up running, he began bicycling for exercise. Now a nationally-ranked dual-athlete, he competes in events across the United States. He uses this training to stay fit for his full-time farrier work.

When the time came to replace his Ford F250 with a new shoeing rig in 2003, Pepper undertook a new contest: create the most efficient truck for his business.

He wanted to buy something smaller than his full-size Ford. He viewed the large truck as wasted space and money. “A lot of farriers will use their trucks as a storage shed. You don’t need all of that excess. I don’t work in my truck. Just like guys I know who get a new truck every 3 years — I think that is wasting money. It isn’t necessary for your work.”

He selected a 4-cylinder 2002 Toyota Tacoma after determining its bed and a shell would suffice for his business. Riding on 16-inch tires, the truck is also equipped with an airbag system to handle an increased load.

To outfit the truck for his line of work, Pepper then took on the challenge of outfitting the bed. He obtained pictures of shoeing trucks he liked and talked to other farriers about their ideas. After creating a design, he began making his alterations. He did all of the work to the shell to complete his vision, including the aluminum…

Quick Steps For Keeping Your Clinchers In Service

Keeping Your Tools Working For You