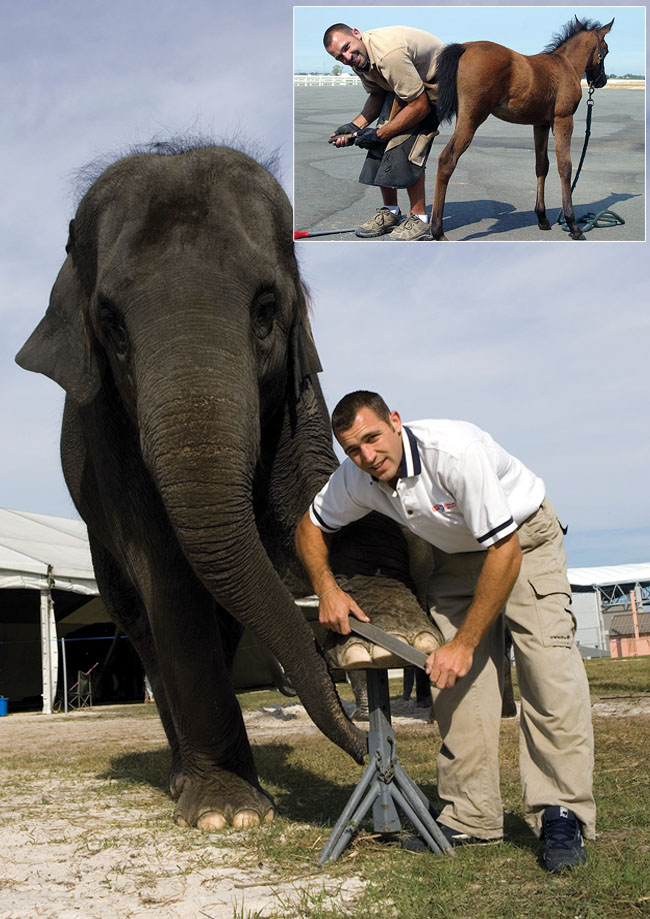 Mike Hayward, at work in his current occupation as a farrier (inset, above) and in his earlier career as an elephant trainer. He says providing footcare for elephants was an important part of his work with the animals and eventually helped lead him into horseshoeing.

Even in a profession known for unlikely beginnings, Mike Hayward’s route to becoming a farrier is unusual. Before he turned to shoeing horses, Hayward, a native of Somerset, England, was the head elephant trainer for the Blue Unit at the Ringling Brothers Barnum & Bailey Circus.

Now, as a recent graduate of Bob Smith’s Pacific Coast Horseshoeing School in Plymouth, Calif., he’s embarked on a new career, which, he says, “isn’t that much of a stretch at all.”

Hayward was studying animal care at Cannington College in England and found his calling when one of his courses included a tour of duty in the elephant department.

“The day I walked through the door, I was hooked,” he says, “and I never looked back. They’re so intelligent and sensitive. And they took to me as I took to them.”

Upon graduation, Hayward went on to work with zoos, safari parks and wildlife parks throughout England training and caring for elephants. He eventually got an offer from Ringling Brothers. He packed his bags and hopped the pond to America, where he spent the next 7 years, “living next to my best friends.”

Balance as a Tale of the Tape

Advising Horse Owners on How to Head Off Navicular Disease