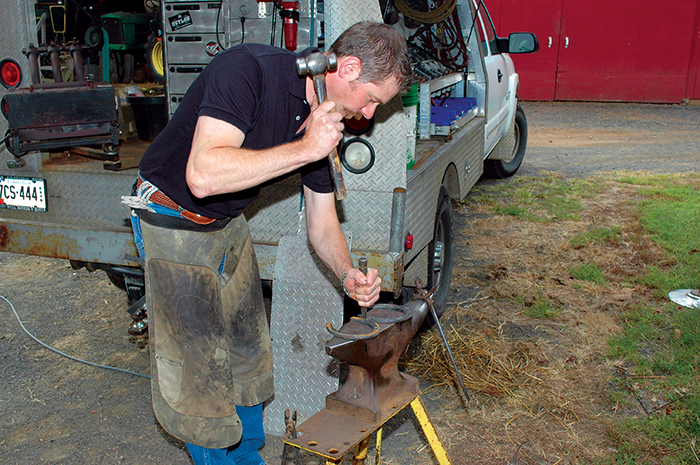 A Shoer Who's Always on the Go

By Pat Tearney posted on January 1, 2010 | Posted in Shoeing

Geoff Goodson is one of those people who only seems happy when extremely busy. According to his wife, Kim, the farrier from East Hampton, Conn., is a classic Type A personality. He’s always on the go, always has to be doing something, is always thinking and is always looking ahead.

And most often, that thinking and looking ahead has something to do with horses. Goodson is a horseman from way back. Kim, who first started dating him when they were in high school, says she got into horses because he was.

Consider the day Goodson had at an Equine Affaire a couple of years ago. In no particular order he:

He didn’t sell tickets or popcorn — at least so far as we know — but he probably would have been willing to if someone had just asked.

Today probably won’t be quite that busy, but Goodson does have a full day of “Shoeing For A Living” ahead of him. But he wouldn’t have it any other way. That drive and need to always be doing something is at least part of the reason Goodson became a farrier. He was attending college and majoring in biology with some thought of eventually going to veterinary school when he became interested in…

The Shoer Goes to School

Shoer to the Stars