By Pat Tearney posted on March 1, 2010 | Posted in Education

Doyle Blagg, of Collinsville, Texas, has been shoeing horses for more than 50 years and has probably shod more American Quarter Horse Association, American Paint Horse Association and Appaloosa champions than any one. He’s also known for developing farriery techniques that have influenced other farriers.

But what seems to have impressed his peers most about Blagg is his willingness to help other farriers and his commitment to sharing his knowledge with farriers, trainers and horse owners. He has appeared as a clinician around the world,, but is also always ready to offer a little “tail-gate consulting” with another farrier who has stopped by his workshop or at a barn where he’s working.

A self-effacing man who enjoys great popularity with his peers, Blagg urges farriers and horse owners to always keep in pursuit of more knowledge. Despite more than a half century of experience, he maintains he continues learning all the time, noting that keeping an open mind has enabled him to learn from everyone from Hall Of Fame shoers to backyard farriers who have shown him a new technique or tip. 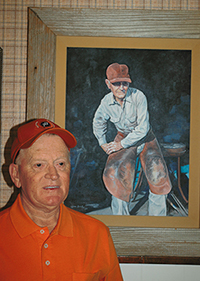 Four For the Hall