“In the true Skradzio style, he shod his last horse just days before he was beckoned to a higher calling,” says long-time friend and fellow Hall Of Famer Dave Duckett. Over the years, Skradzio earned a great reputation in the hoof-care world as both a great technician and clinician.

At the request of the family, a memorial fund has been set up in Skradzio’s name to serve as a scholarship fund for young farriers as well as an emergency fund for farriers in time of distress.

A 2004 American Farriers Journal “Frankly Speaking” column featured a number of Skardzio’s thoughts regarding the early days of a horseshoeing career that covered 65 years. You’ll find these interesting comments on the AFJ Web site at www.americanfarriers.com under “News.” 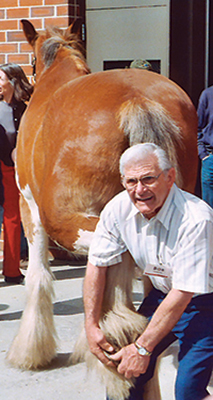 For his victory, Shannon won a 1-year subscription to American Farriers Journal. The…

Premium content is for our Digital-only and Premium subscribers. A Print-only subscription doesn't qualify. Please purchase/upgrade a subscription with the Digital product to get access to all American Farriers Journal content and archives online.
KEYWORDS Bob Skradzio Dave Duckett International Horseshoeing Hall Of Fame Shop talk