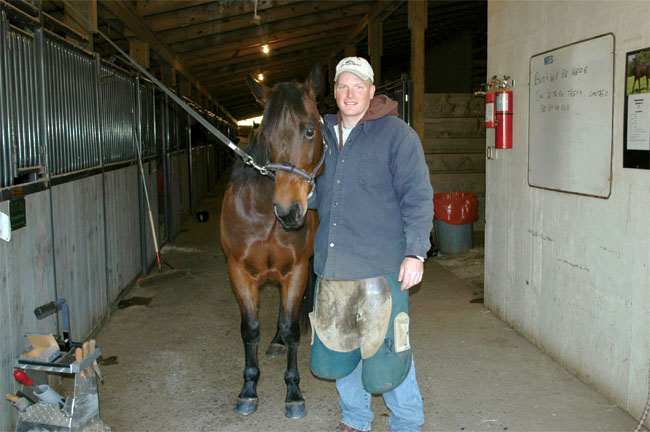 By Jeremy McGovern posted on March 1, 2009 | Posted in Shoeing

Shoeing For A Living in New Jersey, Eric Fischer may not get to spend time on the job with his wife Katy, but he does get to occasionally work with her horse’s feet.

Just like unexplained delays and bottled tap water that per gallon costs 10 times as much as diesel fuel, an inquisitive stranger sitting in a nearby seat is one of those inevitable treats at American airports.

When waiting for our flight at General Mitchell International Airport in Milwaukee for this edition of “Shoeing For A Living,” a fellow Wisconsinite asked me about the nature of my business and travel. After explaining that AFJ Technical Editor Red Renchin and I were headed to New Jersey to spend a day with a farrier, the woman was in disbelief. Like most naive Midwesterners, her idea of the Garden State isn’t picturesque regions of Central and South Jersey.

Horsepeople from the area get a kick out of this. One of those amused is farrier Eric Fischer. “They probably think all of New Jersey is like Newark because that is what they see when they fly in up there,” reasons the Jackson, N.J., horseshoer.

On the drive to meet Fischer, it was crystal clear that this part of New Jersey is nothing like Newark, or for that matter, Paterson, Camden and Atlantic City.

Unlike the stark differences between his home and other areas of the state, Fischer has many approaches that other farriers will find common. But incorporating customer service technology into…

Be Consistent When Evaluating The Work Of Other Farriers