Farrier finds that laser level can sharpen some fuzzy issues

Lasers are used in a variety of fields, often in very high-tech ways, but some farriers are finding lasers useful for a more mundane, but vitally important task; helping them to better see a straight line.

Phil Armitage, a farrier from South Berwick, Maine, says he started using a laser level in his shoeing after attending a clinic at which Roy Bloom of Drummond, Wis., and Dave Farley, of Coshocton, Ohio, both members of the International Horseshoeing Hall Of Fame, demonstrated the device’s use.

Armitage, who has been shoeing for 10 years, is frank about that fact that the laser helps him better “see” what shoers usually try to imagine or visualize.

“Visualizing a line isn’t always easy,” he says. “It’s tough to do.”

Armitage recalls an exercise he participated in during his early days in horseshoeing school. His instructor had all the students sight down a hoof in the same way and had them share what they saw.

“We all looked at it and saw it differently,” he says. “He wanted to show us that we all have a different eye.”

After attending the Bloom and Farley clinic, which was sponsored by Farrier Product Distribution of Shelbyville, Ky., Armitage decided to buy a laser level. He picked up what he describes as “a good, rugged, carpenter’s level” at Sears. 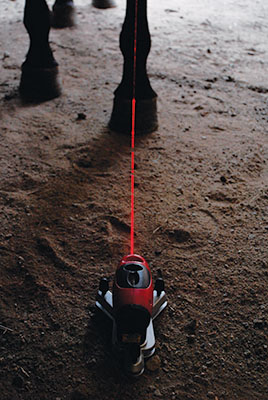 Laser levels can help farriers better visualize the “imaginary lines” that are used in judging various aspects of horseshoeing.

Armitage has found the laser most useful in…

Premium content is for our Digital-only and Premium subscribers. A Print-only subscription doesn't qualify. Please purchase/upgrade a subscription with the Digital product to get access to all American Farriers Journal content and archives online.
KEYWORDS balance Laser Level Lasers pat tearney Phil Armitage

Light Vs. Dark: The Hoof Debate Rages On

Give And Take On Natural Balance