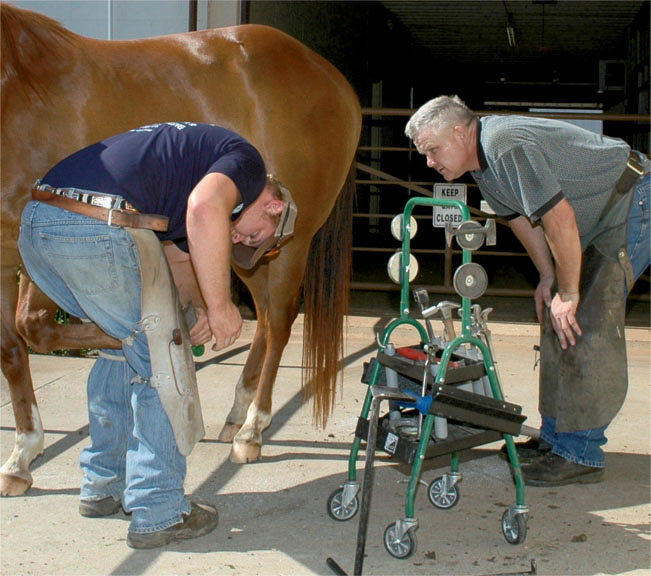 Farriers Ride to the Rescue After Rig is Stolen

Texan Pat Burton is the victim of theft, but finds out he has lots of friends

After his truck was stolen, Pat Burton, right, has received help from other farriers to continue his work. He’s shown here providing some guidance for his associate Brandon Sargent at his farrier shop next to the Burleson Equine Hospital.

It is often said that the farrier industry is like no other profession — partially due to its close-knit nature. In May 2009, horseshoer Pat Burton received a reminder about this spirit.

Earlier in that month, the Burleson, Texas, farrier’s shoeing rig was stolen from a local repair shop. The 2000 Ford F350, outfitted by Stone Well Bodies & Equipment, was loaded with Burton’s tools, equipment and a healthy inventory of shoes.

When news spread among local farriers and at locations like Texas Farrier Supply in Kennedale, Burton started receiving calls from shoers throughout the South.

While some provided tips on possible sightings of the stolen truck and equipment, many came forward to lend help to the Texas farrier. He received offers of free use of shoeing rigs, hand tools, inventory and other shoeing essentials. A farrier that Burton had given an anvil to 4 years ago came to his shop and returned it.

“I’ve gotten calls from guys letting me know they’ll give me whatever I need,” says Burton. “In what other industry would you see your competitors come out to help you?”

As American Farriers Journal went to press, the truck and equipment have not been recovered.

“The Box” To Return To AFA Auction

Athletes have only a limited…