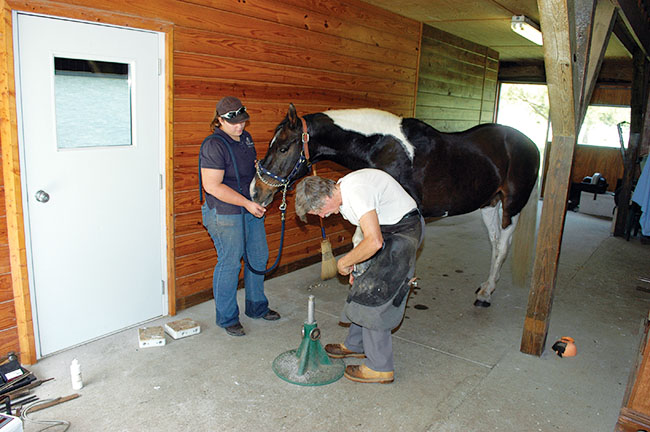 By Pat Tearney posted on January 1, 2012 | Posted in Therapeutic Shoeing

When a Virginia vet/farrier faced a hoof with multiple problems, his solution included multiple parts

Sometimes you have to put in a little extra creativity to get the right shoeing package.

M.M. “Tookie” Myers, a farrier and veterinarian from Chesapeake, Va., demonstrated that while working on a gelding named Cherokee. He put together a package that combined a hoof boot with a wedge pad and a shoe.

Cherokee, who belongs to a long-time client of Myers, is a horse with a history of metabolic issues.

“He just doesn’t want to grow any feet,” Myers said, explaining that the lack of sole growth was due to poor circulation. The wall was collapsing from poor quality horn exposed to wet turnout.

That made for a challenging situation when the horse tore off his left front shoe, taking along a good chunk of his inside hoof wall in the process.

Myers needed to come up with a package that would accomplish several tasks. He needed protection and support for the damaged hoof. But because of the extent of damage to the hoof wall, as well as its generally poor condition, nailing a shoe in place was all but impossible. And even if a package could have been nailed on, it was very unlikely to stay in place. 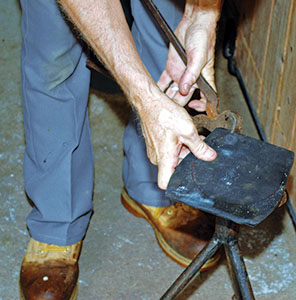 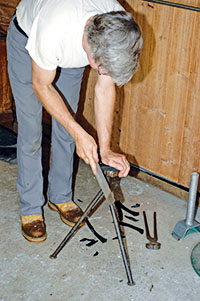 Myers uses his nippers and a rasp to shape a plastic wedge pad on his stall jack.

The horse also has very thin soles (so thin, in fact, that when he took radiographs of the feet, Myers actually used his nippers to shorten the marker tacks he used to…

Wedge Pads Useful For A Variety Of Problems

Taking The Mystique Out Of Shoeing Long-Footed Horses