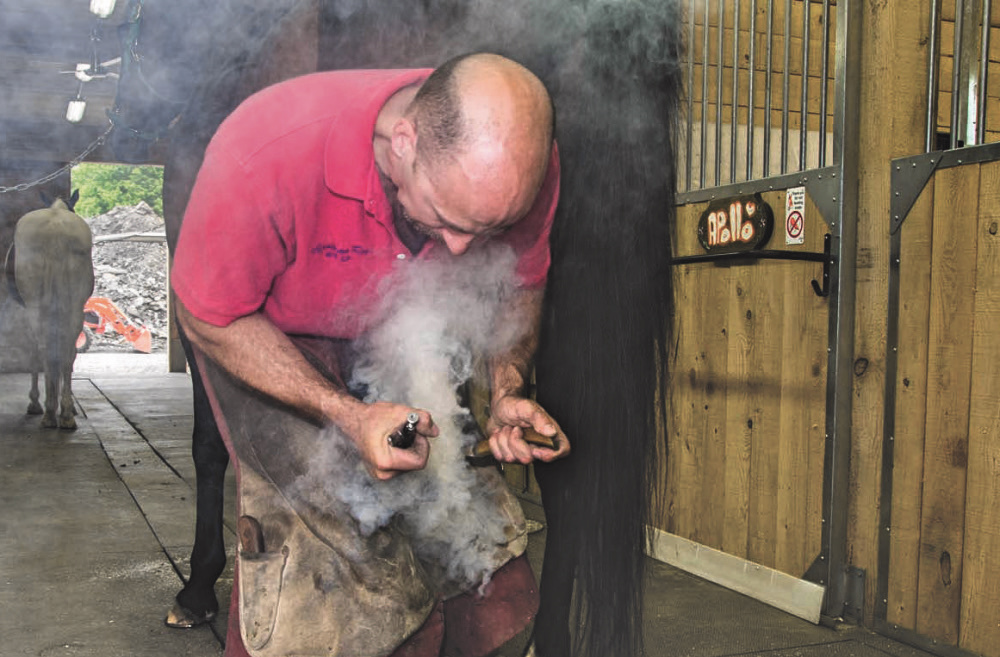 By Jeremy McGovern posted on July 1, 2014 | Posted in Forging, Shoeing

Quebec farrier Christian Roy has advanced his footcare practice by keeping horses sound, but he finds attention to detail is a difference maker in client satisfaction

Pictured Above: Roy’s practice covers an area about an hour southeast of Montreal, Quebec. He shoes a mixed bag, but mainly sport and trail horses. Here, he’s hot-fitting one of his trail horses

Christian Roy has been a horseman for most of his life, owning draft horses for many of those years. Those draft horses deserve much of the credit in leading Roy to become a farrier.

Roy couldn’t find farriers who would consistently work with his horses and weren’t dissuaded by the size of the animals. Compelled by this difficulty, Roy investigated how he could be proficient enough in farriery to care for his own horses’ footcare needs. About 25 years ago, a farrier who was retiring agreed to sell his equipment on the condition that he also train Roy.

Over 2 decades, Roy continued to apprentice with his mentor, then worked with other farriers before going out on his own part-time. Leaving his job as a Purina feed rep, he made the jump to full-time shoeing 7 years ago. Back pain prevented him from making the jump earlier, but a chiropractor successfully addressed that.

Based an hour southeast of Montreal in Cowansville, Quebec, Roy mainly shoes sport horses and trail riders, which is a common balance among farriers of the area. Other than one large barn, his accounts are within a 30-minute drive. Although he doesn’t own those draft horses any longer, Roy still has an affinity for them.

“I still do some draft horses, but not too…

Setting a Standard in West Texas