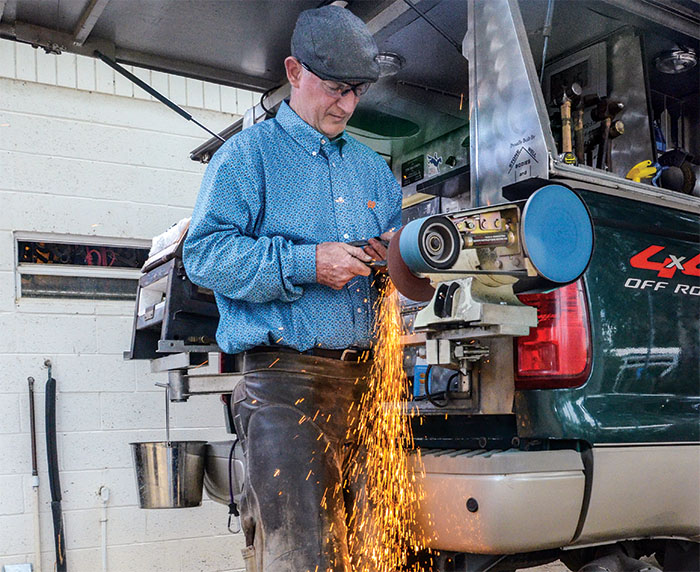 Building His Own Style In Southern California

By Jeremy McGovern posted on March 1, 2015 | Posted in Shoeing

There are obvious advantages for farriers who grew up around horses and entered the trade at a young age. They should be further ahead in several aspects of farriery than their counterparts who entered the profession later in life. The earlier someone can build their knowledge of equine anatomy and skills trimming and shoeing feet, the greater the likelihood of success as a farrier.

However, because farriery is the only job they’ve ever known, these early bird shoers missed out on learning the positive traits from other professions. These experiences may have nothing to do with horses at all, but can enrich a farrier practice and help it advance.

Moreno Valley, Calif., farrier Tim Shannon belongs to the latter group. That’s not to say he’s deficient in his knowledge and ability as a farrier. He spent time around horses in the early 1980s and later became a farrier in 1987, building a solid practice that covers Southern California. However, he credits those early years spent in restaurant management and as a sheet metal worker as contributors to advancing his practice.

“From the restaurant side, I learned the importance of customer service, which has really influenced how I communicate with clients,” he says. His experience in the sheet metal shop has aided the more technical aspects of his work, like forge work or modifications he’s made to his shoeing rig.

Despite the important role of those skills learned elsewhere, a farrier still has to rely on an ability to keep horses…

Experience Calgary in Your Own Shop