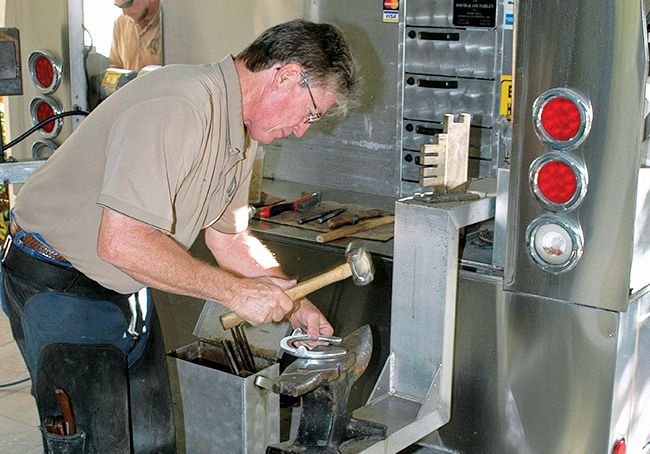 Dave Farley shapes a shoe at the anvil as he works in Wellington, Fla. The anvil is mounted on a swing arm that is powered by an electric motor, saving the Farleys from having to lift the anvil manually. Behind Dave, his son, Jay, is busy at the other side of the shoeing rig, fitting leather pads to shoes. The rig is designed with the forging area behind the truck and the pad and grinder station on the left side.

Dave Farley’s late January day of “Shoeing For A Living” starts at Brooklyn Bagels, a deli-coffee shop, not far from his home in Wellington, Fla. There he meets his son and shoeing partner, Jay. He also hooked up with Red Renchin, the recently retired farrier who also serves as technical editor for American Farriers Journal, and me.

Renchin is also spending the winter in the Wellington area, and he’s met the Farleys at this particular breakfast spot before. In fact, it’s a regular early morning gathering spot for many of the area’s farriers, who meet for a quick bite, a cup of coffee and to touch base with one another.

Dave Farley, a native of Ohio, has split his practice between his home state and the Wellington area for several years. He’s in the process of winding down much of his Ohio operation. He started shoeing with Frank McGinnis in 1967, meaning he has more than 40 years of experience under his belt. He, his wife, Karen, and Jay…