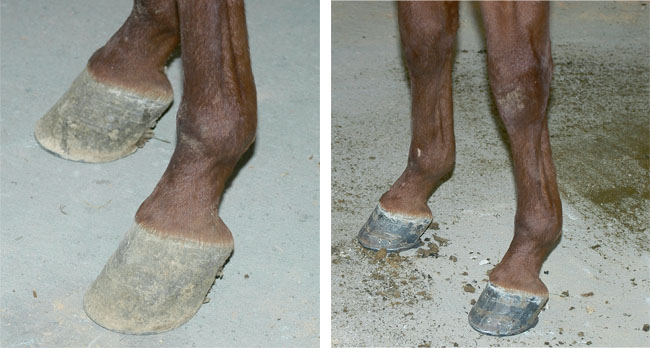 By Ron Perszewski posted on January 1, 2008 | Posted in Therapeutic Shoeing

Trim away the bent horn tubules to get down to the straight ones, and deal with each foot on its own merits, says a noted farrier and teacher

This case of an overgrown toe is accompanied by the typical low heel that farriers commonly run across in their shoeing. Corrective measures by a farrier returned the foot to its proper form.

You look at the foot and there it is: a weak heel that you suspect might lend itself to the development of a foot with long-toe, low-heel syndrome. The bad heel might have been caused by trimming the heel too low or by a naturally weak heel prone to collapse. Or it could be caused by excessive wear at the heel that, studies have shown, can be brought about by a shoe, especially one that’s too small, that exposes only the heel to wear.

The question is, what do you do now?

First, look closely at the heel to determine the true nature of the problem. Don’t confuse weak heels with contracted heels, for example.

“There’s a lot of difference between weak heels and contracted heels. A contracted heel will usually be very upright,” says Chris Gregory, the owner and operator of the Heartland Horseshoeing School in Lamar, Mo.

“Whenever you have an upright horse, you’re going to have really upright heels, very strong bars, deep commisures and a small, wispy frog that’s prone to thrush. His toe will dish. There’s a lot of stuff happening on the high foot,” Gregory adds.

The real risk of developing a long-toe, low-heel hoof is indicated by an underrun heel, also called a sloping heel or collapsed…