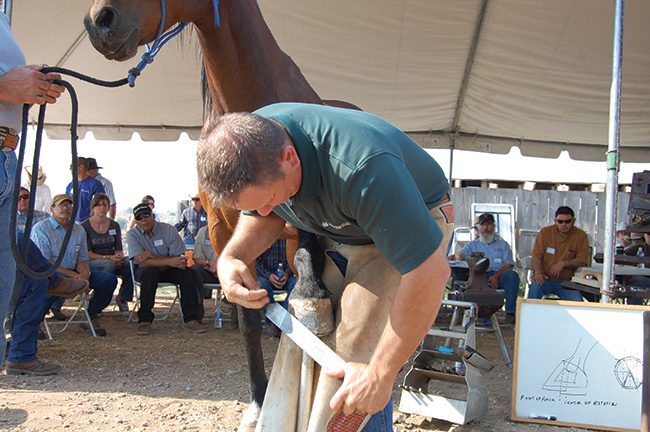 By John Bradshaw posted on December 1, 2011 | Posted in Anatomy

Oklahoma farrier Mark Milster dubbed this hoof back before he started trimming, since it had much more length than height. Note the bevel he rasped in from the bottom to use as a guideline.

Mark Milster gave some tips on everyday shoeing and forging at the first-ever clinic held at San Marcos Feed, near Santa Fe, N.M. When San Marcos Feed took over the farrier supply side of Wagon Mound Ranch Supply, owner Tom Macdonnell decided to continue the tradition of hosting an annual shoeing clinic.

Milster, who resides in Washington, Okla., is a clinician for Delta Mustad Hoofcare Center, sponsor of the event. He’s an American Farrier’s Association Certified Journeyman Farrier and has earned top honors at the North American Shoeing Championships, as well as World Champion Blacksmith title at the Calgary Stampede.

There was no classroom-style portion of the clinic; Milster just talked as he shod two horses, answering questions and allowing audience members to participate as much as they desired.

One of Milster’s first tips was for farriers to watch horses travel before any work is done, not only for the benefit of the horse, but also for their own protection. Too often, he says, a farrier notices a horse is off after it is shod and doesn’t realize the horse was lame beforehand and the shoeing has nothing to do with it. The shoer may then spend a lot of time searching for a mistake and the owner may not speak up.

Looking Back with a Southwest Shoeing Legend