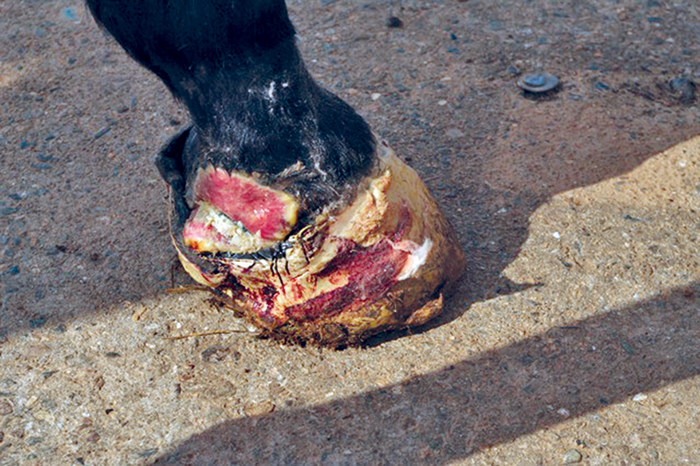 By Bob Smith posted on July 1, 2011 | Posted in Anatomy, Lamenesses

Several options were tried to get this horse back to work

After the injured horse arrived, an unsuccessful attempt was made to stabilize the foot, even though the lateral hoof was torn much like a severe quarter crack. The veterinarian elected to remove the lateral collateral cartilage and hoof wall from the number 4 nail back to the heel. An egg bar shoe was applied.

The Grace Foundation of Northern California is the largest equine rescue program in El Dorado Hills, Calif. They receive abandoned, neglected and abused horses from the American Society for the Prevention of Cruelty of Animals (ASPCA) and animal control agencies located in nine counties.

Winston was one of those rescue horses. He was abandoned either before or after his hoof injury. While the cause of the injury was unknown, this was the worst foot injury I’ve ever seen!

The horse had a severe cut on the medial aspect of his left front foot where wire or metal had left a cut between the short pastern/coffin bone and the medial collateral cartilage. The injury created a very deep quarter crack that was bleeding.

Mike Russell, DVM, evaluated the injury, flushed and cleaned the wound. Winston was a grade-5 lame horse and was reluctant to move. The foot was anesthetized and examined. It appeared that the medial collateral cartilage was no longer attached to the coffin bone. 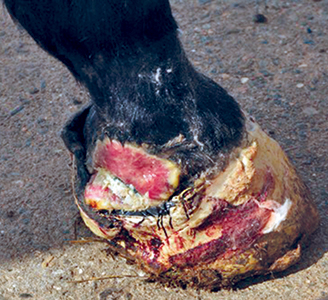 Once a portion of the collateral cartilage and necrotic tissue was removed, the wound was stabilized with Equilox. 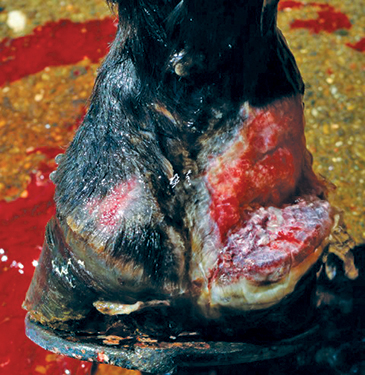 After the injured horse arrived, an unsuccessful attempt was made… Trim Seen As Key In Treating Stumbling, Other Conditions