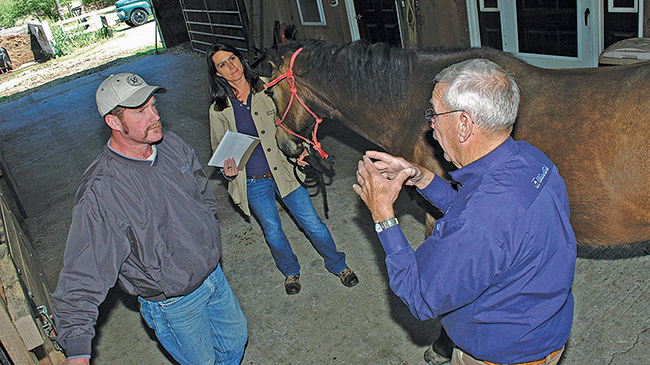 Taking a Closer Look at a Horse's Conformation

If you can't localize a subtle lameness, sometimes the key may be going back to the beginning.

When you’re dealing with one of those hard-to-pinpoint, subtle lamenesses in a horse that just won’t seem to go away, it might be time to go back and re-evaluate that horse’s conformation.

That’s part of the lesson learned during a recent trip into the field with Blake Brown, a lameness consultant and veteran farrier from Penryn, Calif.

Brown’s approach to shoeing horses seems simple enough. He emphasizes trimming and shoeing with the goal of balancing the horse to its conformation.

But the devil, as it’s said, is in the details.

Brown has retired from regular shoeing after a career that started in 1963. But he continues to work as a clinician for Delta Mustad Hoofcare Center, as well as a lameness consultant through his own business, Hoof Sense.

Brown spent the final 20 years of his career as the resident farrier at Loomis Basin Equine Medical Center in Loomis, Calif.

During early May, Brown combined his dual roles as a clinician and lameness consultant during a trip to the Midwest, where he met Mark Franks, a farrier from West Harrison, Ind. During the 2011 International Hoof-Care Summit, Franks won the “Day With A Clinician,” door prize, sponsored by Delta Mustad Hoofcare Center, one of the Educational Partners for the event.

Brown and Franks got together for a visit at the barn of one of Frank’s clients, just outside of Harrison, Ohio. (West Harrison and Harrison straddle the Ohio-Indiana state line and Franks has clients in both states.)

Premium content is for our Digital-only and Premium subscribers. A Print-only subscription doesn't qualify. Please purchase/upgrade a subscription with the Digital product to get access to all American Farriers Journal content and archives online.
KEYWORDS goal of balancing high-low syndrome horse's conformation subtle lameness Trimming and Shoeing

A Wide-Ranging Look at Laminitis

Common Problems to Look for When You First See a Horse