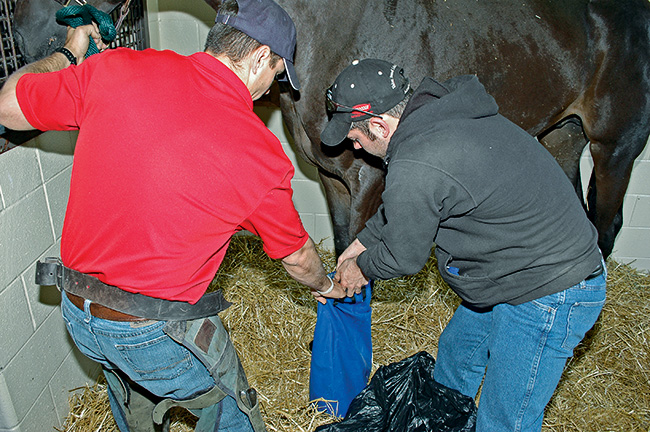 By Lisa Kemp posted on September 1, 2011 | Posted in Diseases

A long-practiced treatment, cryotherapy still delivers benefits as our understanding of its effectiveness slowly increases

It used to mean simply standing a lame horse in the cold-running creek out back to soothe legs and feet and alleviate signs of lameness. Cryotherapy has come a long way since then in terms of what it’s used for and the tools to administer it, but the method’s safety makes it a therapy to rely on. Now, research is confirming that cryotherapy can also have application in the early stages of laminitis.

Good Therapy For Aches And Sprains

Cold has several different characteristics that make it a useful therapeutic method, including analgesic (pain relief), hypometabolic (metabolism slowdown) and vasoconstrictive (constriction of blood vessels) qualities. Pain sensations are inhibited when the speed of impulses conducted by nerve fibers is slowed by cold; this type of slowdown is also responsible for a reduced inflammatory response when cryotherapy is applied.

Using cold as a human treatment modality has been employed in controlling pain and swelling for thousands of years. In humans, cryotherapy temperatures typically range from 50 to 77, with only brief periods of exposure to cold — longer exposure or more extreme temperatures can cause problems ranging from tissue damage to frostbite.

However, research has shown that horses tolerate much colder temps quite well and for extended periods of time, especially methods involving the distal limbs and hooves. The equine haircoat appears to provide an insulating layer in both directions.

In equine cryotherapy treatments, the target temperature is approximately 41 degrees, and the application of ice or ice/water mixes can involve…