Rescue cases often call for the ingenuity of farriers to overcome the actions of neglect or cruelty. Often that resourcefulness is required to keep the horse alive.

In April 2013, Triple-H Miniature Horse Rescue in Mandan, N.D., seized 129 horses as part of a rescue in the state. Alison Smith, the founder of Triple-H, says most of the horses were starving.

Shortly after, Boston, a mini, was taken in and presented a complicated issue that stood out among the others.

“She had been found with baling twine wrapped around both her back legs,” Smith recalls. “The vet felt it had severed her tendons and was close to bone.”

The twine had worked its way through the skin, causing lacerations to the deep digital flexor tendon of the right hind (Figures 1a and 1b). The wound also was infected and the hooves had not been trimmed in more than a year.

Equine veterinarian Jan Nelson removed the twine (Figure 2) and treated the horse for infection. The rescue organization enlisted Bismarck, N.D., farrier Allan Voeller to help with the injured right hind. The farrier had worked with the group before, trimming several of its horses.

The next day, Boston was brought to Voeller’s shop for the first of several visits.

First the horse needed to be trimmed. After removing the excessive foot, Voeller trimmed the horse (Figures 3-5) so that he could apply a plate to the right hind foot. 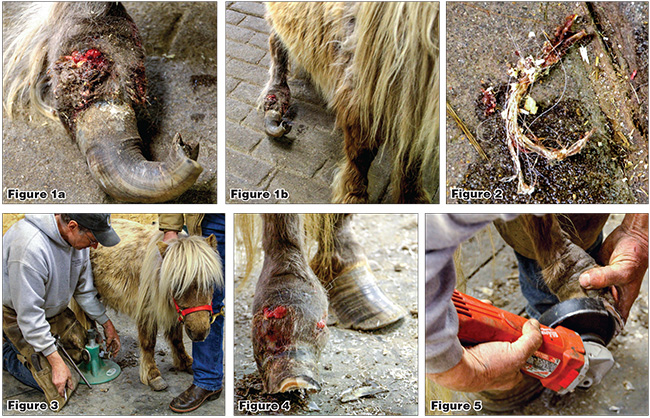 Back To The Basics In A Rescue Case

Not a Textbook Case