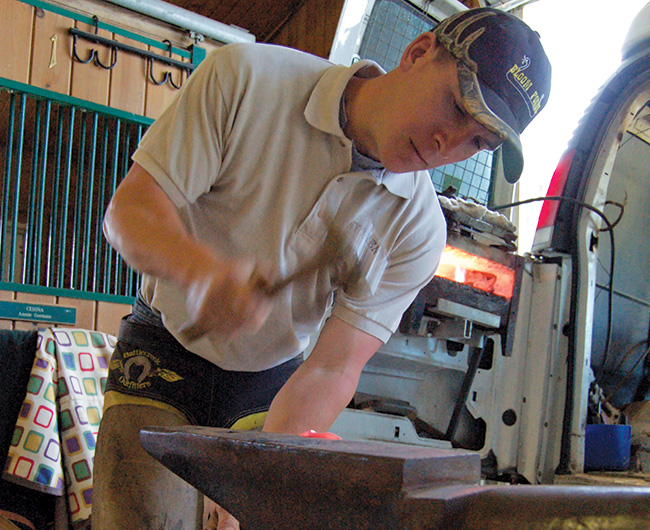 Out of the Gate Running

By Jeremy McGovern posted on July 1, 2011 | Posted in Shoeing

In only a few years, Wisconsin farrier Joe Nygren has established a thriving practice by improving his skills and paying attention to the details

You’ve likely heard someone say, “Things haven’t worked out like I had planned.” Usually this statement is followed with a sigh, as the person laments his or her poor choices or fortune in some aspect of life.

When Joe Nygren talks about the unexpected outcome he experienced in his early shoeing career, the Wisconsin farrier smiles instead of sighs.

“When I got out of shoeing school, I thought I’d go back to my regular job welding fire trucks, shoe on the side, build my client list and then decide whether to take the leap from part-time to full-time shoeing after 5 years,” he recalls.

Greeted with success, Nygren made that leap in spring 2008 — just under a year after graduating from the Heartland Horseshoeing School in Lamar, Mo. In February 2011, he was named a Rising Shoeing Star, an annual award presented at the International Hoof-Care Summit that recognizes farriers who are succeeding 3 years out of school.

Since surpassing his early forecast, the 31-year-old farrier has continued to grow his flourishing practice that covers the area surrounding Green Bay, Wis.

Nygren says it is uncommon to grow a farrier practice so rapidly in his area. He is grateful for a client who began telling fellow horse owners about him. If he had to do it over again, Nygren doubts he would have grown his client list this quickly.

When it comes to nail selection and placement, Nygren subscribes to the theories of the smallest and fewest nails needed.

Premium content is for our Digital-only and Premium subscribers. A Print-only subscription doesn't qualify. Please purchase/upgrade a subscription with the Digital product to get access to all American Farriers Journal content and archives online.
KEYWORDS flourishing practice Heartland Horseshoeing School joe nygren Rising Shoeing Star Shoeing for a Living

Successful Track Shoeing Requires a Strong Start Out of the Gate

Time is Running Out

Staying Out of the Horse’s Way