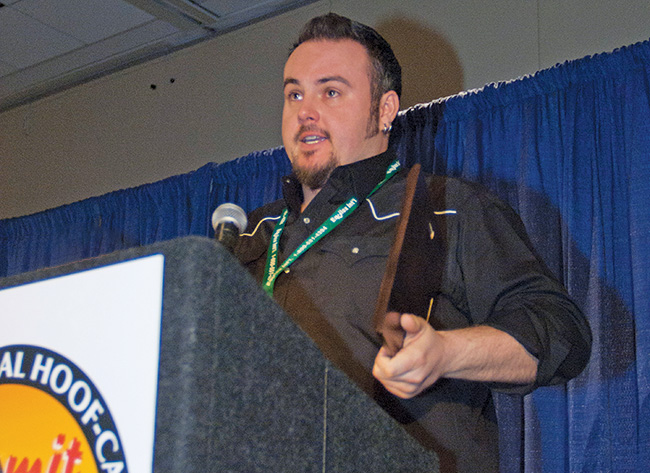 By Michelle Drewek posted on March 1, 2012 | Posted in Business Practices

Beckstead’s son, Justin, receives the Hall Of Fame honors on his father’s behalf

The International Horseshoeing Hall Of Fame was started in 1993. This year’s three new members have all left their mark on the shoeing industry through hard work, dedication and a passion for equine footcare. A common thread in their careers is their willingness to share knowledge and help others in the industry improve the overall state of hoof care and soundness. Current members of the Hall served as the electors for this year’s nominees.

The late Clark Beckstead, who passed away March 14, 2011, was a highly respected farrier in the Santa Barbara, Calif., community. He received many nominations praising his work, a true testament to his lasting impact.

Beckstead attended Oklahoma Farriers College in the early ’70s on an impulse — an impulse that turned into an over 30-year career.

Beckstead’s wife, Karen, and son, Justin, are overjoyed to see Clark’s career honored in such a prestigious way. Justin says that the most rewarding part of his father’s career was the many young and ambitious farriers he had… Michelle Drewek is the Digital Media Manager for American Farriers Journal. A graduate of the University of Wisconsin-Milwaukee with a degree in Journalism & Mass Communications, she joined the Lessiter Media team as an editorial intern in Spring 2011 before joining the staff full-time at the start of the new year.