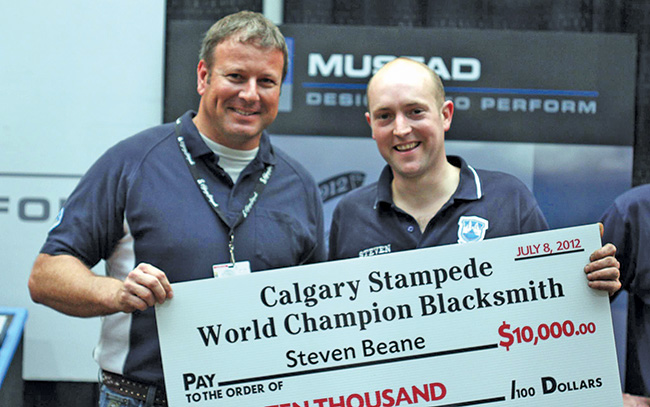 Steven Beane of Northallerton, Yorkshire, England, is only the third man to claim four straight wins at the World Championship Blacksmiths’ Competition (WCBC) held during the Calgary Stampede. As the champion, he takes home a $10,000 check, a limited edition bronze trophy, a handcrafted Stampede belt buckle, jacket and other prizes.

Moon is the only competitor to win a Calgary title five straight times, from 1988 through 1992. Canada’s Bob Marshall won the first four competitions, from 1980 through 1983.

“I’m more than holding my own. I’d say I’m really happy with this result. A pretty good accomplishment today,” says Moon, at age 50. “I think Steven’s just a bit more hungry than I am. I just play at this. It’s my golf. I’m here to make up the numbers for the other guys.”

The event hosted 72 competitors from 14 countries during the 4-day competition. The final five collected points in 10 different classes.

During Sunday morning’s semifinal, 10 remaining contestants shod the front feet of a light…