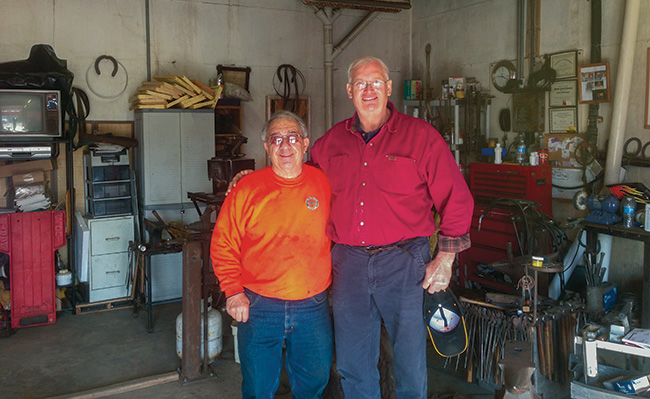 By Charles Derrick posted on September 1, 2013 | Posted in Shoeing

During the 2013 International Hoof-Care Summit in Cincinnati, my name was drawn for a door prize, which was 3 days working with Sonny Pistilli, CJF.

Sonny established Far Hills as a major teaching center in 1983, where he has been training a new generation of farriers ever since. His instructional video, “Getting Started the Right Way” has been an introduction to the trade for many students.

My first thought was to gift the prize to some other farrier who might need the help. I went to Oklahoma State Horseshoeing School in Ardmore, Okla., under the late Reggie Kester and have been shoeing since 1981. I have also been to Bob Marshall’s forging clinics.

I’m from Navarre, Ohio, about 10 minutes south of Canton and the shoeing market I work in has many great farriers like Randy Luikart, Bob Selansky and Jim Foy, who have been part of the United States Horseshoeing Team, as well as Jim Bondra, who has been on the cover of the American Farriers Journal. There are a host of other farriers who are not as well known, but exceptional nonetheless.

I have been very fortunate to have such a high standard to live up to and the farriers who have worked here in the past and present help others with their skills. My appointment book is as full as a 12-egg carton with 13 eggs in it. I just didn’t think I’d have the time to get away for 3 days, but I am glad I…

Saving Time At The Anvil