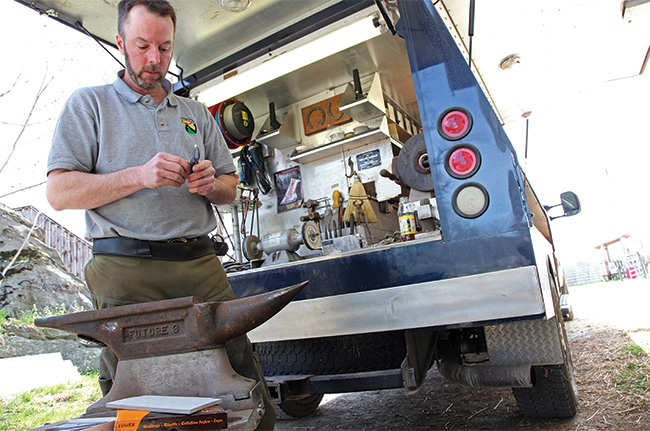 On a day that featured a variety of breeds and disciplines, the constant within Taylor Keenan’s practice was quality hoof care delivered with sound reasoning

Have an understanding of the how and why when making hoof-care decisions. Keenan says you are on the wrong path when you can’t explain your methodology to clients.

Every horseshoer knows a farrier who found the trade after previously pursuing one, two or maybe more alternative careers. The earlier careers range from those with more natural transitions within the equine world, such as trainers or feedlot cowboys, to others that aren’t tied to horses at all, like software engineers or musicians.

And while many have come to farriery after working elsewhere, those who begin their hoof-care study lacking horsemanship typically don’t fare as well as those who do. Though rare, it is not impossible that some of these farriers not only establish a practice, but build a thriving business.

New York farrier Taylor Keenan is one of those peculiar horseshoers. Based in Clinton Corners, his 8-year-old practice covers the Hudson Valley between New York City to the south and Albany to the north. His clients range from Icelandics, hunters/jumpers, dressage and several backyard clients.

With no formal background with horses, Keenan found hoof care serendipitously. About 10 years ago, he and his wife, Suzanne, both worked in the financial industry and lived in Atlanta, Ga. The couple decided to move to their current area after Suzanne visited family in the region and fell in love with it.

It wasn’t until they arrived in New York that Keenan was introduced to farriery. His wife, with a much greater sense of horsemanship…

Premium content is for our Digital-only and Premium subscribers. A Print-only subscription doesn't qualify. Please purchase/upgrade a subscription with the Digital product to get access to all American Farriers Journal content and archives online.
KEYWORDS establish and grow practice hoof-care decisions how and why methodology quality footcare Shoeing for a Living sound reasoning Taylor Keenan

Beware Of The Unintended Consequences Of Footcare

If Or When Will Technology Revolutionize Footcare?