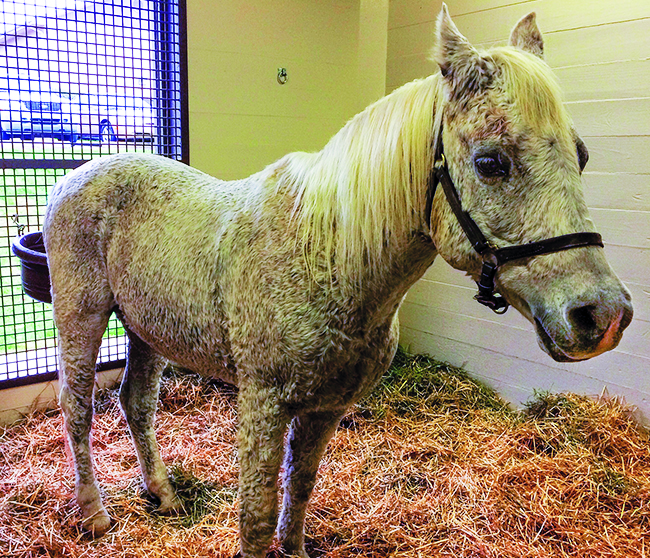 By Christy Corp-Minamiji DMV posted on January 1, 2015 | Posted in Diseases

Farriers, vets and clients must band together to face treatment challenges

Senior horses may have multiple issues that affect trimming and shoeing strategies, from old injuries to arthritis that limit range of movement or the ability to hold up a hind leg. But the one condition that can most frustrate the owner-vet-farrier team is Cushing’s disease.

Cushing’s disease1 occurs when the pars intermedia portion of the brain secretes abnormal hormone levels. These hormones in turn produce high levels of adrenocorticotropic hormone (ACTH), which stimulates the adrenal gland to produce cortisol, a stress hormone. However, the exact mechanism of Cushing’s disease is not completely understood in the horse, and hormone responses in these horses can be inconsistent.

To the farrier, laminitis typically is the most relevant result of Cushing’s — and often the most frustrating.

The exact process of laminitis development in these horses is unknown. However, it could be associated with insulin resistance. Persistent hyperglycemia (high blood sugar) is a common finding in horses with Cushing’s.

Diagnosis is made based on clinical signs and history, as well as blood test results. Since horses with Cushing’s may produce different hormone levels, and often are inconsistent with each other, veterinarians…

Can the particular region where a horse lives have an impact on potential Cushing’s disease dangers?

Know The Signs Of Cushing’s Disease