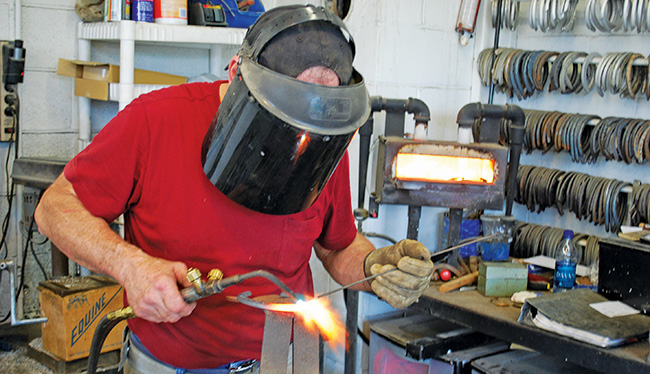 Sorting Out Your Welding Choices

By Red Renchin posted on January 1, 2013 | Posted in Equipment, Forging

With lots of options, the key is finding the system that best fits the needs of your practice and the limits of your pocketbook

Welding equipment is almost standard equipment at Standardbred tracks, where track farriers weld Borium to shoes for traction and make other modifications throughout busy days. Here Terry Burger adds Borium to shoes in his shop at the Meadows Racetrack and Casino near Pittsburgh, Pa.

From the time that the horse was domesticated, farriers have been limited by the availability of materials and technology. Imagine the frustration of trying to shoe without steel, plastic, adhesives, welders or grinders. Of course this has changed dramatically, but it still holds true today in that we are limited to what is available.

Historians have differing opinions on the development of farriery. But whether you trace its origin to rawhide “hoof boots” augmented with metal studs in ancient Asia, to strapped-on metal “hipposandals” used by first century Romans, or shoes that were nailed on to the feet of Frankish war horses in Charlemagne’s Holy Roman Empire, forging and forge welding were the only methods our ancient farrier forefathers had for making and modifying metal horseshoes.

But in 1835 Harry Burden, an American, patented the first process for manufacturing shoes. He was able to produce one shoe per minute. In 1882 a Russian, Vasily Petrov, invented the first carbon arc welder. Acetylene was discovered in 1836 but was not practical until 1900 when a workable torch was invented. Gas welding held its own until the 1920s, when great advances were made in electric welding. By the 1950s, wire-feed welders were in use along with shielding gases…