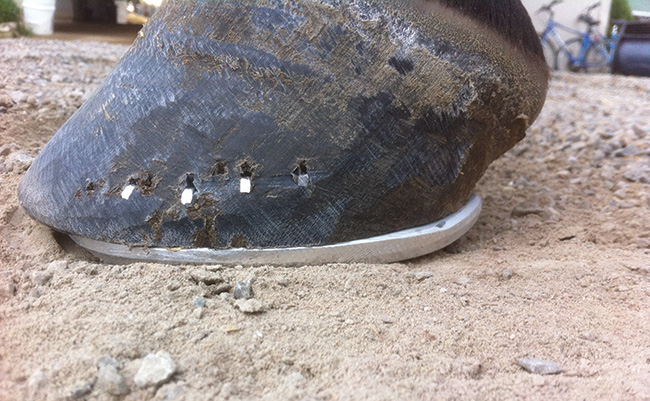 By Heather Smith Thomas posted on September 1, 2013 | Posted in Lamenesses

Hoof-care professionals talk about the topic often, but sometimes aren’t even starting from the same definition

Breakover. Enhancing breakover. Easing breakover. Changing breakover. It’s one of the most frequently used terms in the farrier vocabulary. Everyone seems to have thoughts and opinions and — surprise, surprise — they often aren’t the same.

Breakover: What Is It?

The same article, describes the breakover point as, “The most dorsal part of the ground surface, either the hoof capsule in the unshod horse or the shoe in the shod horse, that is in contact with the ground at the moment the heels begin to rise off the ground.”

Farriers are more likely to describe it as the act of lifting the foot from the ground (the heel coming up first) and rolling over the toe. Most often, they believe breakover should be at the center of the toe and describe the breakover wear point as the portion of the hoof that is last to leave the ground.

This is also a topic that horse owners, riders and trainers have seized upon.

Here are some thoughts on breakover drawn from discussions with four hoof-care professionals.

Balance: More About The Trim Than The Shoes