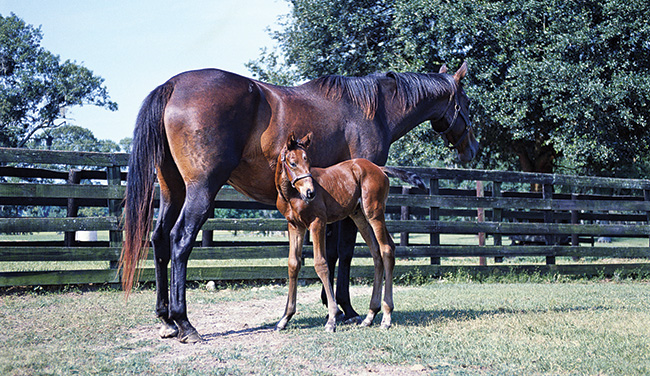 Routine and effective hoof care is important for the health of broodmares, and healthy mares are more likely to deliver the healthy foal an owner wants.

Though broodmares may not receive the daily scrutiny of their athlete counterparts, proper husbandry — including appropriate hoof care — is essential to maintaining the health, welfare and investment of the in-foal mare.

Although broodmares may be housed on pasture and do not perform, their hooves undergo the same growth and wear as those of other horses. In fact, the metabolic and physical stresses of pregnancy may make broodmares more susceptible to diseases of the foot, increasing rather than decreasing their need for proper farriery.

Given that a broodmare does not produce a tangible return on the owner’s investment for nearly a year, and that she often does little other than eat during that time, the temptation may be to “turn her out” and forget about her. However, this approach is detrimental to the health and welfare of the mare and, in the long term, to the owner’s pocketbook.

“Routine foot care is imperative,” says Raul Bras, DVM, CJF, of Rood & Riddle Equine Hospital in Lexington, Ky. “It sounds simple, but some people just don’t take care of it. If you don’t routinely trim a horse, you can’t have a healthy foot. You start having cracks, separations, underrun heels and long toes. Routine footcare is imperative during gestation.”

Hoof-Care Highlights: The Week of June 20

Hoof-Care Highlights: The Week of August 8