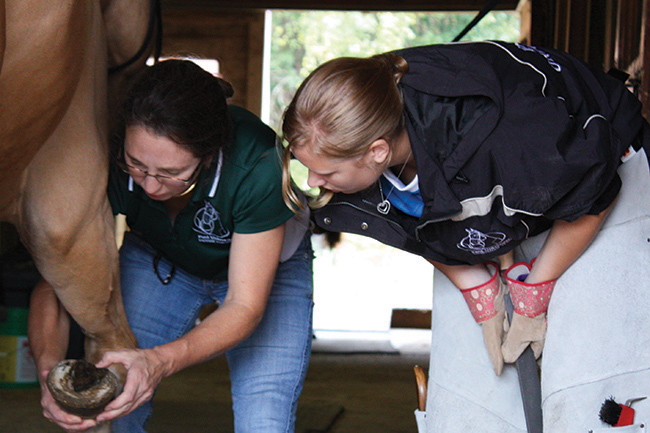 Should You Charge by the Hour?

By Michael LoCicero posted on November 1, 2013 | Posted in Business Practices

Abby Nemec realizes her pricing philosophy is “not how farriers usually do things.”

She began charging her clients by the hour, rather than by the horse, after a personal revelation in the late 1990s.

“I got to the point where I was charging $40 per trim and I’d get three horses done in an hour. That was fine, but then I’d go to another barn and it would take more than 2 1/2 hours to trim two horses and I would walk out of there with $80,” she says. “I thought ‘there is something wrong with this world.’ So I changed my philosophy.”

The part-time farrier and full-time academic program manager/director of the equine program at Post University in Waterbury, Conn., didn’t go to horseshoeing school and started with a client list full of “problem” horses.

Nemec became interested in hoof care in 1998 while working at a local YMCA camp. She had horses of her own at the time and asked her farrier to show her the basics of trimming and shoeing.

She then spent 3 years providing hoof care at the YMCA camp, after which she began picking up clients of her own. By 2003 she was a full-time farrier with about 140 horses at her peak. Equine nutrition consulting and thermal image processing kept her from working 40 hours a week in the farrier field, but as a short (5-foot-3) and small (“I don’t weigh a lot”) person, larger horses became increasingly frustrating to shoe and…

How Much Should You Charge Per Horse?

So What Would You Charge Now?