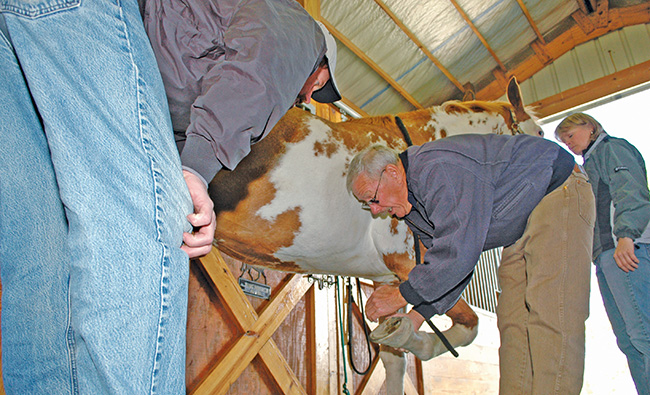 By Pat Tearney posted on November 1, 2013 | Posted in Diseases

Chronic flares, dished toes and underrun heels are often a sign of not properly addressing balance and conformation

It’s almost a given. Ask a farrier to describe how he or she trims a foot and at some point, you’ll hear some variation of, “I’ll address any flares.”

There’s nothing really wrong in that statement. But veteran farriers also know that if you have to address flares on a particular horse every time you trim or shoe it, you haven’t actually addressed it — you’ve just dressed it.

Blake Brown, a farrier and hoof-care consultant from Penryn, Calif., says that rasping away a flare may restore the hoof wall to symmetry, but if you don’t take care of the underlying problem that caused the flare, you’re very likely to see it again when you return in 6 to 8 weeks. That problem could also be affecting more than just the hoof wall. It could be stressing soft tissues, putting pressure on cartilages and the navicular area and possibly causing problems in the coffin or pastern joint.

“The reason a horse gets flares is because it’s bearing weight on that side of the foot,” says Brown, who spent more than 20 years as the farrier at Loomis Basin Equine Medical Center in Loomis, Calif. “The opposite side gets longer or higher, tilting the foot in that direction. As that side gets higher, all the weight is on the other side, the wall flares out and may actually break away from pressure, particularly if the horse isn’t shod.”

This problem is often not the farrier’s fault — at…

Changes are Coming to the Hoof Care Industry: Are you Getting Ready?

It All Came from Trying to Save $35

Are You Considering More Than Feet When You Trim And Shoe?