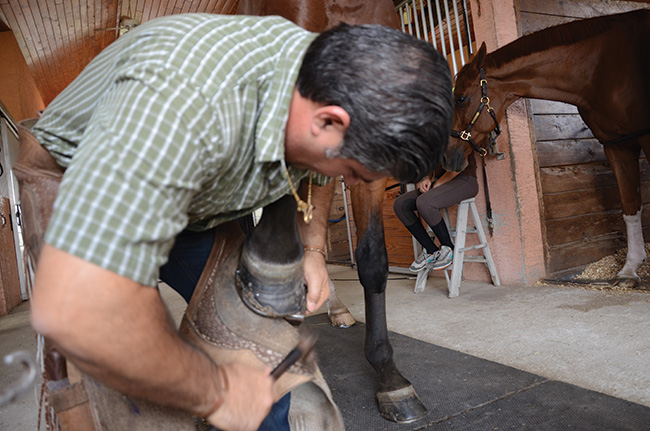 Changing the Way You Work

By Shannon Venegas posted on December 1, 2013 | Posted in Safety & Healthcare

With bodily pain and discomfort, you must pay attention to what your body is telling you

Most farriers can list a number of physical ailments. For some it’s the back. Others suffer from tennis elbow. But what few realize is that a simple change of posture under the horse and beginning daily exercise can ward off part of the cumulative work trauma.

Physical therapist and equestrian Ann Schultheis of Dousman, Wis., has worked with several farriers throughout her career. One of the biggest worries is the lack of strength in the abdominal muscles.

“Without a really strong core or lower abdominal muscles … overstretching and bending forward overstretches and weakens the muscles,” she says.

Schultheis also points to another important area in the body for farriers — the shoulder. She sees numerous shoulder problems because many farriers fail to use it properly.

The shoulder joint is complex and many farriers only rely on their basic shoulder movers, or deltoids, to get the job done. However, Schultheis says the core of the shoulder joint is found in the mid-scapular muscles, which are larger and increase arm strength.

Schultheis also says farriers can be prone to wrist and hand ailments. These include carpal tunnel and tennis elbow because of the way farriers hold their elbows out to the side, as well as the constant and repetitive grip when using hand tools.

And of course, Schultheis sees a fair share of back problems with farriers. Back disorders are typically the result of poor posture, faulty body mechanics and loss of flexibility.

“It’s the movements where they…