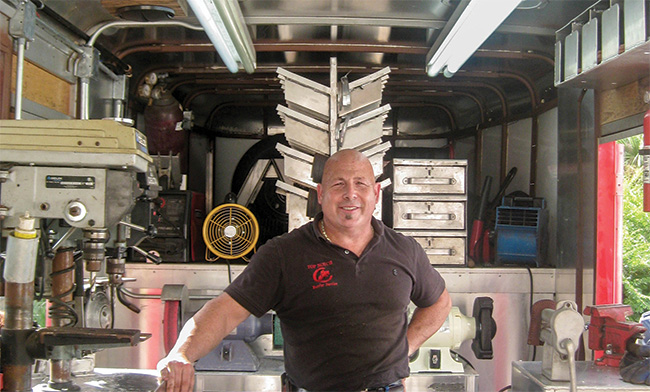 Saving Time With An Ever-Changing Trailer

By Jeremy McGovern posted on January 1, 2014 | Posted in Equipment

Taking inspiration from a colleague and others, North Carolina farrier Robbie Shuler has made efficiency the driving force behind his trailer

A few years ago, Robbie Shuler was perfectly happy with his shoeing trailer. But beginning in 2013, the farrier from Wellington, Fla., did a complete remodeling of what originally was an Adam horse trailer.

“When I bought the trailer, I wanted to keep most of my stuff inside, out of the elements,” he recalls. “I also prefer a trailer because if you have vehicle issues, you can use a different one to pull the trailer.”

After buying the trailer, he became friends with Loxahatchee, Fla., farrier T.J. Jones, and the two began shoeing sport horses together in Wellington, Fla. In 2010, as he spent more time working out of Jones’ trailer, Shuler discovered some ideas he never considered for improving his own trailer’s layout.

“When I began riding with T.J., I liked the way he had his trailer set up,” he says. “Sometimes there were three of us working in it, but the way T.J. had the workstations laid out allowed the work to flow together well. 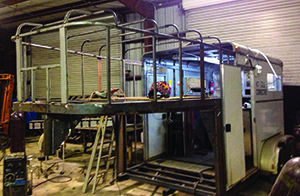 Shuler’s practice also covers a wide range of horses in North Carolina. He worked with a welding shop in North Carolina to convert the trailer to a gooseneck because he wanted to have the advantage of tighter turns. He does find one disadvantage with using the trailer in Wellington: tight space. Space can sometimes be a premium on the show grounds. “You’ve got to be good at putting a trailer anywhere,” he says.

“I had an advantage by working out of T.J.’s trailer…

An Ever Evolving Industry

Taking The Time With Each Horse