With performance horses and racehorses, suspensory ligament injuries are often a significant cause of lameness. Most importantly, the constant stress placed on these ligaments after an injury occurs can be a major concern during the healing process.

Nathaniel White of the Marion duPont Scott Equine Medical Center in Leesburg, Va., told attendees at the early December American Association of Equine Practitioners meeting in Nashville, Tenn., that there are major concerns when it comes to selecting the best treatment for these types of injuries. The goal with these treatments is to reduce inflammation and stimulate ligament healing with these types of injuries.

“But a concern is the fact that the stress on these structures does not change as the result of the normal weight-bearing that is required during the resting period,” he says.

Along with fellow equine vet Jennifer Barrett and farrier Paul Goodness, White found using a fetlock support shoe with this type of injury can lead to quicker healing by preventing excess stress on the suspensory ligament.

This technique was particularly helpful in supporting the rear fetlock during treatment of suspensory ligament injuries.

Also known as the Roberts Shoe, details on the fetlock support shoe are found in several farriery and veterinary books published as far back as the early 1900s. In those days, these shoes were often used to treat tendon or suspensory ruptures. 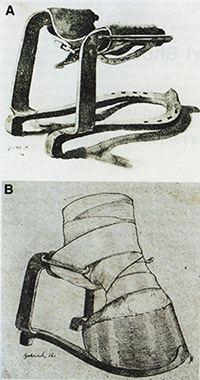 What Causes the Most Serious Racing Injuries?