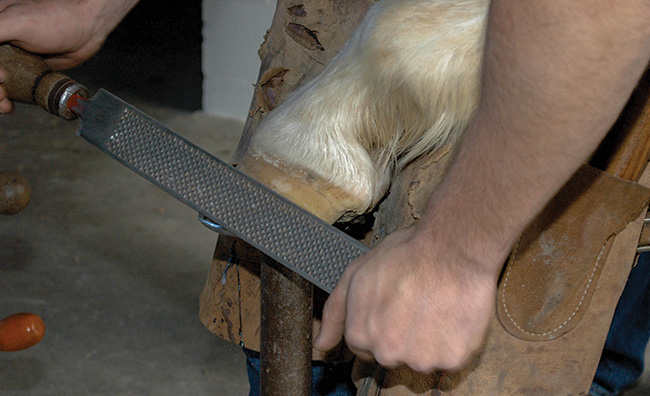 By Pat Tearney posted on January 1, 2014 | Posted in Equipment

Danny Ward, late farrier from Martinsville, Va., might have been as well known as a "tool guy" as he was a horseshoer. But the member of the International Horseshoeing Hall Of Fame, maintained that at least some of his penchant for tool repair and maintenance was a matter of necessity.

“When you’re running a shoeing school, you can’t afford to replace your tools every class or two,” says Ward, the long-time operator of the Danny Ward Horseshoeing School. “It’s just not financially practical. So you learn to fix your tools and slick them up a little bit to get them to last a little longer. Especially when you see things like a student using a hoof nipper to pull off a shoe and trying to trim a hoof with a pull off.”

While many farriers may not have the skills or experience to work on tools that Ward has, he shared some relatively simple tips during a classroom session at the 2013 International Hoof-Care Summit in Cincinnati, Ohio. Some of them take only a few minutes of effort a day and require a minimum of skill, but can have immediate results and help your bottom line.

“These little things can pay off,” Ward says. “After all, tools aren’t cheap.”

Get More From Your Rasps

Ward says that rasps are probably the most expensive tool most farriers use. Obviously, rasps don’t cost as much as a good pair of hoof nippers or some of your other tools with a high one-time…

Tool Tips From A Tool Master