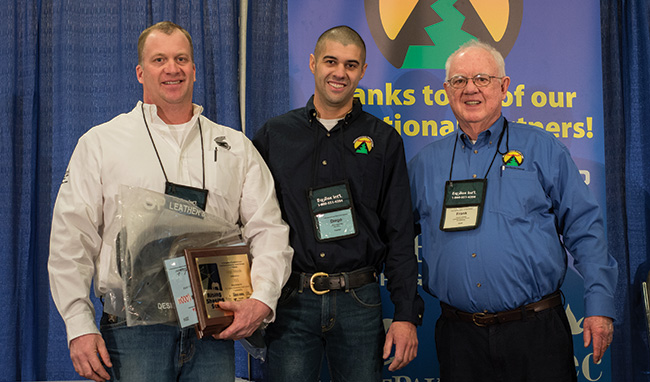 By Amy Johnson posted on March 1, 2014 | Posted in Education

Five years ago, American Farriers Journal joined several industry suppliers to create the Rising Shoeing Star award to be given out each year at the International Hoof-Care Summit. This award is presented to three farriers who have made incredible professional progress within 3 years of graduating from horseshoeing school.

In addition, the first-place recipient receives $1,000 and the two runners-up each receive $500. The schools that produced the three winners also receive plaques and copies of the Kitchen Sink package for student use.

The farriers honored at the 2014 Summit were Diego Almeida of Danville, Ill., Austin Fisher of Purcell, Okla., and Riley Kirkpatrick of Salem, Ore. All were 2010 graduates of horseshoeing schools.

Almeida is a graduate of the Midwest Horseshoeing School. He says he chose the Divernon, Ill., school because it had a good program at an affordable price.

After completing the 12-week course, Almeida realized that horseshoeing is something that requires a lifetime to master and didn’t feel quite ready to start his own business.

“I decided to do an apprenticeship,” he says, “and luckily enough I was introduced to Steve Sermersheim, who kindly took me under…