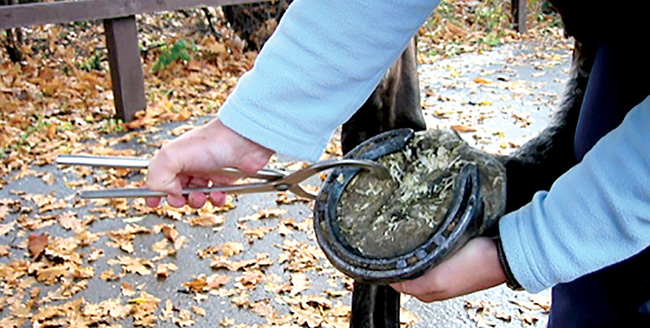 How Reliable Is The Use Of Hoof Testers?

By Jeremy McGovern posted on March 1, 2014 | Posted in Shoeing

Hoof testers are a go-to tool for veterinarians and farriers alike. But how consistent is the usage among practitioners? Can differences in applied force tell us anything about how hoof tester results can vary?

Researchers from the Royal Veterinary College in the United Kingdom conducted a study in 2012 to look at force used by comparing results from small groups of farriers veterinarians and novice users.

For this study, the group used modified hoof testers. The instrument’s end was slightly cut off to fit a load cell, which was connected to a monitoring unit.

The study used 24 volunteers, 12 experienced (5+ years of weekly use of hoof testers) and 12 novice users (less than 10 total times usage of the instrument). Among the experienced group were seven veterinarians and five farriers.

The groups used the modified hoof testers on Thoroughbred cadaver hooves, with the limb situated in a hinge to allow movement. For a 5-minute interval, each subject was instructed to repeat application of the maximum amount of force they would use if the horse didn’t provide any reaction. The subjects targeted four sites — the toe, quarter, frog and heel­ — ­­each marked with non-water-soluble paint on the cadaver hoof to standardize the instrument placement. Participants weren’t allowed to see the results on the meter. For purposes of this experiment, all units were later converted to Newtons.

Data from the study, seen in the charts on Page 63, revealed significant force application among the…

Premium content is for our Digital-only and Premium subscribers. A Print-only subscription doesn't qualify. Please purchase/upgrade a subscription with the Digital product to get access to all American Farriers Journal content and archives online.
KEYWORDS hoof testers Jeremy McGovern Royal Veterinary College

How is Your Hoof Care Affecting the Inside of the Equine Foot?