By Chris Gregory posted on April 1, 2014 | Posted in Forging

We may be coming to the end of an era concerning the World Championship Blacksmiths Competition (WCBC) in Calgary, Alberta. For decades, this served as a special place for many farriers. It is not without a sense of disappointment that we see this door closing, but as the saying goes, another door will open. I am optimistic that the future holds new opportunities for those horseshoers who will follow us. 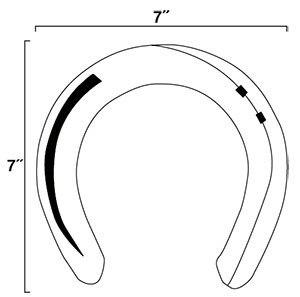 Sponsored by Delta Mustad Hoofcare Center, this sidebone shoe exercise begins with 1/2-by-1-inch stock. You have until June 1, 2014, to get your entry into the AFJ office. Read instructions on how to enter on Page 54.

One of the traditions of the WCBC has been the Calgary Mail-In Forging Exercise. For 11 years, farriers from around the world were challenged to make a variety of horseshoes and, once, a pair of tongs. These entries were collected and judged by some top farriers at Calgary, including Marshall Iles, the WCBC spokesman and volunteer member of the competition committee.

The Mail-In has served as a fantastic way for those who could not compete at Calgary to still be part of the action.

No doubt, the sidebone shoe is fun to make. It’s practical, involves bumping, fullering, punching and beveling, and is hammer finished. That’s right, don’t take it to your grinder.

We’d like to thank Delta Mustad Hoofcare Center for sponsoring this challenge. The overall winner will receive a belt buckle, and everyone who enters will receive a…

Your Last Chance Be Part Of Calgary