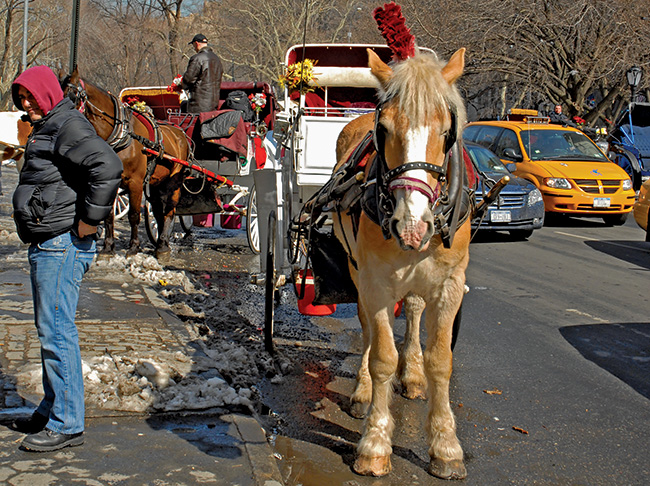 By Jerry Trapani posted on May 1, 2014 | Posted in Business Practices

They say it’s the city that never sleeps, and Aaron Hoover can attest to it.

At 1 a.m. every Wednesday for the past 4 years, Hoover leaves his home in rural Lancaster County, Pa., for the trek to New York City so he can tend to the hoof-care needs of a great majority of the Central Park carriage horses.

Hoover already is finishing up his first horse by the time I meet him at 6:30 a.m. on a cold February day at Clinton Park Stables on West 52nd Street. He takes the black draft-cross off the ties on the second floor and sends him up the ramp to its waiting stall and hostler on the third floor.

Susie is next as she steps into the crossties. The large gray Percheron mare wears size 5 shoes in front and 4s on her hinds.

“I like using Werkman and Kerck­haert shoes for the heavier horses,” Hoover explains. “They hold up well.”

He finds Werkman and Kerckhaert provide a coarser nail placement and greater support because of a wider web.

Traction is incredibly important for carriage horses as they make their way along New York’s city streets. Hoover prefers Drill-Tek as his appliance of choice.

“Drill-Tek stays a little more rougher than Borium,” he says, “so the grip lasts longer.”

Chicago to Vote on Fate of Carriage Horses