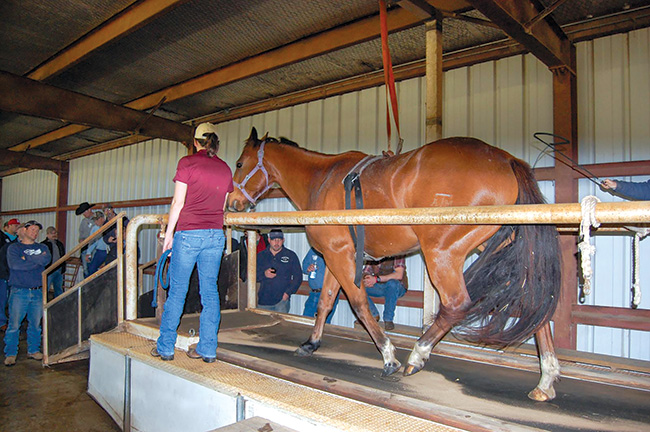 Earlier this year, horseshoers gathered in College Station, Texas, for the Texas A&M University Farrier Conference. Some came for the clinic itself, while others made the trip for the American Farrier’s Association certification exams that were held over the weekend.

One interesting presentation was a demonstration on the effects of incorrect trimming, using a high-speed treadmill for the lameness evaluations.

Dennis Sigler, the Texas A&M AgriLife Extension Service Horse Specialist, led the demonstration, which he admitted was a bit of a test. “We’ve never done this for a group of farriers, so this is what we call research,” Sigler says. “So it might work and it might not — that’s kind of what research is.”

Effect Of An Improper Trim

Two mares owned by Texas A&M had been trimmed beforehand, although Sigler didn’t initially explain exactly what had been done. The first mare was led onto the treadmill and harnessed to the safety device.

After several minutes on the treadmill, the mare was led off the machine, and El Paso horseshoer Doug Hogue began trimming her. Sigler admitted that…

The Importance of Properly Trimming the Bars in Horses Feet