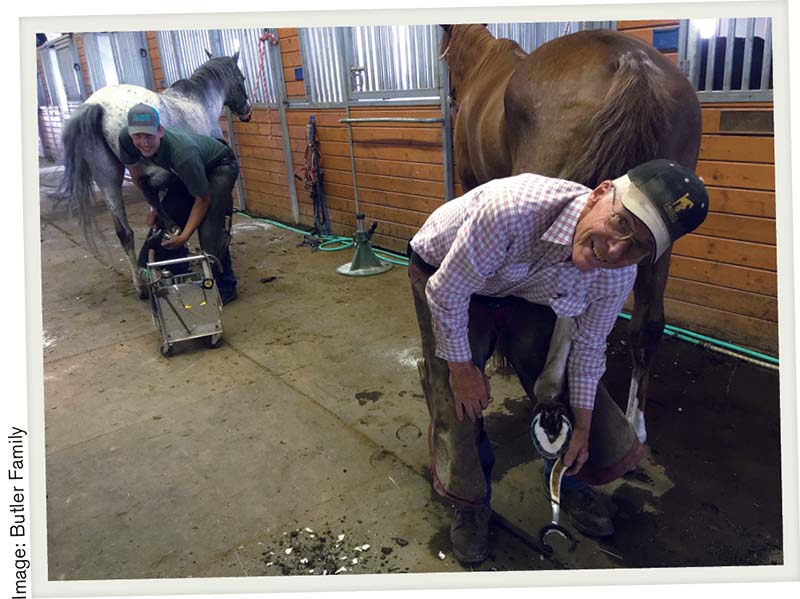 By Katie Navarra posted on January 2, 2023 | Posted in Education

Horseshoeing might be in their genes, but there’s plenty of blood, sweat and tears

Kids didn’t have career choices in the 1800s. Children were expected to follow in their parent’s footsteps, often in a family business. Blacksmiths of the time, like other tradesmen, relied on their sons to learn the skills and backfill the ranks as their elders retired. Most daughters weren’t offered an option back then.

At least seven generations of the Butler family have worked as blacksmiths and farriers. Since Edmund Butler traveled from Ireland to England and then settled in Virginia in 1735, each generation thereafter was a blacksmith, including James Butler who was Daniel Boone’s blacksmith in Kentucky, says Doug Butler, PhD, CJF, FWCF.

“My father was the only one in the Butler direct line who was not a blacksmith, but his father was, and my dad was an expert horseman,” says the International Horseshoeing Hall of Fame member from Crawford, Neb. “My mother’s family came to America in 1635. Many in her line were horsemen and blacksmiths, too.”

Doug involved his children in the horse business as early as they showed interest. All seven kids rode with Doug and tried their hand at it, but Jacob and Pete were the only two who work as farriers today.

“I’m grateful for my…

Metallurgy: How Much Do You Need to Know?