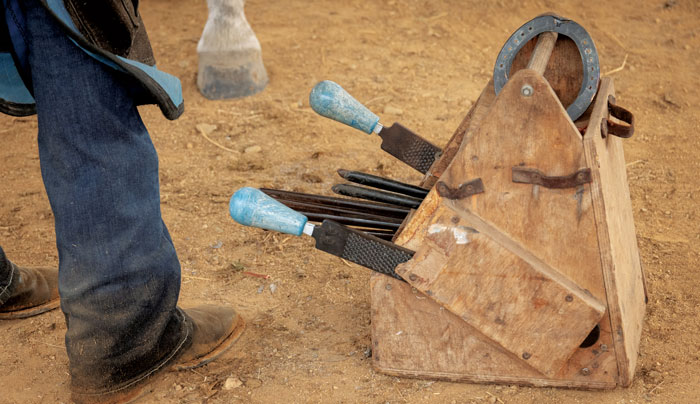 By David Hazlett CJF posted on May 3, 2022 | Posted in Education

As I reached out to open the door of the nondescript building, it opened in my face. A man, the spitting image of Hoss Cartwright (think of the TV show Bonanza, for those under 50), down to the 10-gallon hat, fished about a half ounce of chaw from his lower lip, deposited it neatly on the winter-bare ground and said, “Come on in!”

I stepped through the door and into my future.

It was a 15-minute conversation with a fellow Boston cabbie the winter before that had planted an insane idea: I would learn to shoe horses. I had decided that self-employment was of paramount importance to me, but being a recent college graduate with an English degree, I knew the value of education. So, I did my due diligence and checked out the educational opportunities for farriers. This was 1972, and there were nowhere near the number of shoeing schools we have today. Most were 2 to 6 weeks in length, and I didn’t think that sounded like enough time to learn a trade, especially one I knew nothing about. I heard about the course at California Polytechnical Institute, which lasted a full academic year, but there was a yearlong waiting list, which didn’t fit into my plans. I learned of a 12-week course offered by Rouge River Community College in southern Oregon, and that seemed a good fit, so I signed up and showed up for the first day of class.

Inside the building I saw 12… David Hazlett is a certified journeyman farrier based in Ellensburg, Wash. He has been shoeing for nearly 50 years.