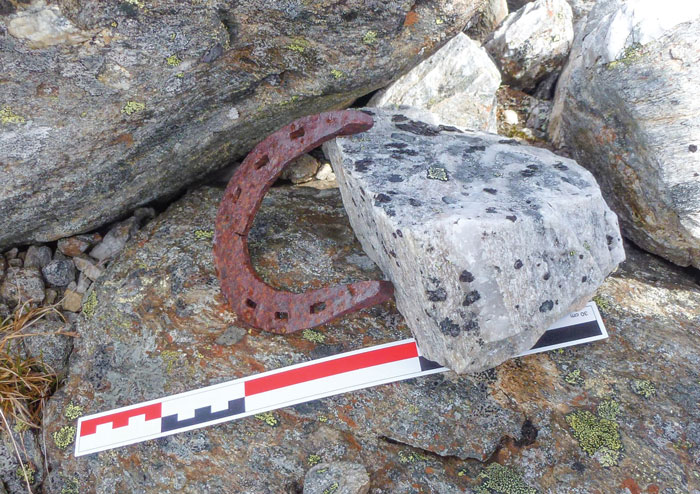 Archaeologists surveying the receding Norwegian glaciers have retrieved nearly a dozen horseshoes and other equine-related objects from eight sites over the past 16 years. Now, more finds have emerged as researchers explore the Horse Ice Patch, and they are hinting that more is to come.

The Oppland County, Norway, glacial archaeologists announced in early April that they recovered “an iron horseshoe and a horse legbone [sic]” while surveying the eastern part of what is referred to as the Horse Ice Patch. The shoe has three evenly spaced nail holes in each branch and appears to feature calkins, although they aren’t as prominent as the calkins on the shoes discovered in the Lendbreen Ice Patch in 2019.

“The shape of the horseshoe suggests that it is post-medieval,” according to the archaeologists. “The traffic through the nearby Lendbreen pass started around A.D. 200 and continued to 1500. So far, there was no evidence of Iron Age or medieval traffic in the Horse Ice Patch pass.”

Competitors will earn points for the American Farriers Team over the course of three contests in the coming year. The maximum number of registrants is 30. All current team members have been offered and accepted entry for the trials, reducing the open registration spots to 25. A wait-list will be opened when the maximum is reached.

The first competition will be…