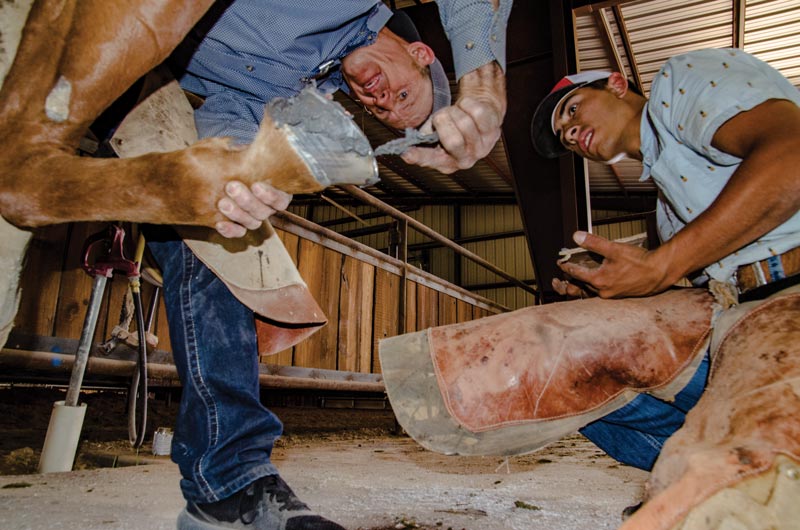 By Jeff Cota and Todd Santoro posted on July 4, 2021 | Posted in Business Practices

Pictured Above: Farriers make significant investments in tools and equipment, face fixed costs regardless of whether work is performed, and their opportunity for loss is greater. These are considered evidence of being an independent contractor under the federal Common Law Rules.

First in a Series

This is the first in a series examining the potential effects of the federal Protecting the Right to Organize Act on farriers’ hiring practices and their hoof-care businesses.

Legislation that aims to impose the most sweeping changes to national labor law in 86 years is swiftly moving through Congress and promises to dramatically change the hiring practices of some farriers.

On its surface, House Bill 842 and Senate Bill 420 — both titled Protecting the Right to Organize (PRO) Act of 2021 — do not appear to be relevant for most farriers. They expressly state that the purpose of the bills is to expand “labor protections related to employees’ rights to organize and collectively bargain in the workplace.” Although the farrier industry likely was not the inspiration when Rep. Robert Scott (D-Va.) and Sen. Patty Murray (D-Wash.) wrote the respective bills, the definition of employee that is included in each…

Premium content is for our Digital-only and Premium subscribers. A Print-only subscription doesn't qualify. Please purchase/upgrade a subscription with the Digital product to get access to all American Farriers Journal content and archives online.
KEYWORDS definition of employee how Common Law Rules affect farrier hiring PRO Act Protecting the Right to Organize Act Tim Shannon Todd Santoro what does the ABC Test mean for farrier Ohio farrier Todd Santoro started horseshoeing in 1994. He works with a variety of disciplines including dressage, eventing, general pleasure and hunter/jumper. He earned his law degree from Northern Ohio University and has taught sports and business law. He serves on the International Professional Farriers Association Board of Directors.