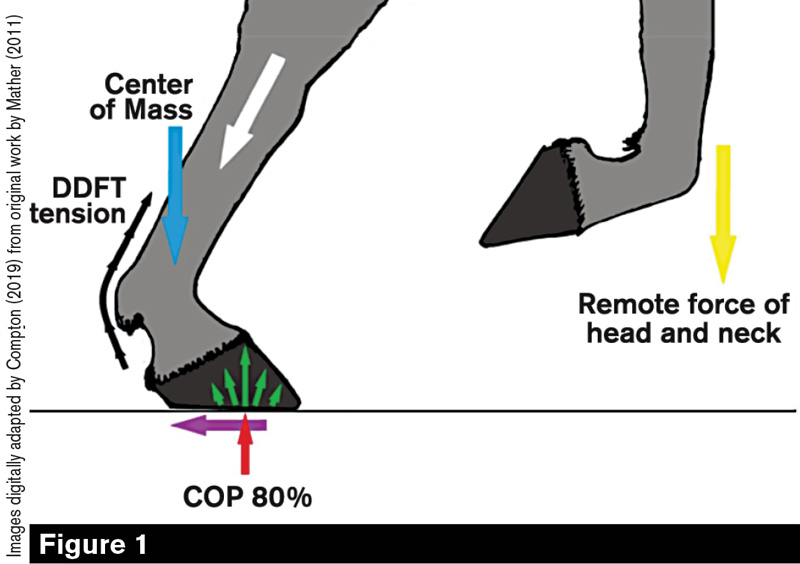 Understand Breakover and the Implications of Manipulating it

Definitions vary among hoof-care professionals, but improperly influencing it can produce significant problems

Pictured Above: At the initiation of breakover, the heels begin to unload as tensile forces in the deep digital flexor tendon overwhelm the extending moment of the center of pressure. The center of mass passes over the foot as the limb retracts under the body. The heels lift off at 80% of the stance phase.

Wikipedia’s mechanical description is closer. It defines breakover in that context as “the maximum possible supplementary angle that a vehicle, with at least one forward wheel and one rear wheel, can drive over without the apex of that angle touching any point of the vehicle other than the wheels.”

At its core, the mechanical definition emphasizes angles and the interplay between where…

Premium content is for our Digital-only and Premium subscribers. A Print-only subscription doesn't qualify. Please purchase/upgrade a subscription with the Digital product to get access to all American Farriers Journal content and archives online.
KEYWORDS defining breakover Dr. James Rooney Dr. Mark Silverman Dr. Mike Miller Ernest Woodward Wayne Preece what happens during breakover what to assess before making adjustments for breakover

Preventing and Managing the Most Common Form of Laminitis

Are Farriers Losing Control Of The Footcare Game?