By Jenny Hagen posted on January 7, 2021 | Posted in Therapeutic Shoeing

Lameness negatively affects the welfare of horses and is one of the main reasons for horse wastage. A susceptible area for damage is the fetlock.

In motion, the distal limb makes use of long, elastic tendons to reduce the metabolic effort of locomotion. During the stance phase, energy is stored in the elastic tissues generating forces used for propulsion, breakover and flexing the joints to lift the toe from the ground during the swing phase. Energy is absorbed during the first half of the stance phase by the superficial flexor tendon and the suspensory ligament and subsequently released as a result of elastic recoil.

During the early stance phase, a rapid extension of the fetlock joint becomes visible and peaks at mid-stance with a subsequent flexion through the late stance phase. During this phase, digital flexor tendons, suspensory ligaments and sesamoid ligaments are affected by high stress. 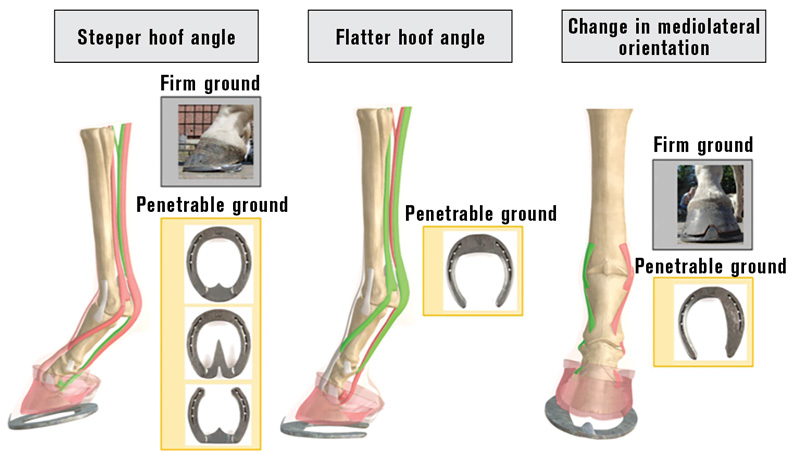 Therapeutic application of orthopedic horseshoes aims to change hoof orientation, and thereby the alignment of the phalanges and the digital joint angles, as well as the fetlock angle.

Premium content is for our Digital-only and Premium subscribers. A Print-only subscription doesn't qualify. Please purchase/upgrade a subscription with the Digital product to get access to all American Farriers Journal content and archives online.
KEYWORDS Dr. Jenny Hagen ligament shoeing to support the fetlock joint therapeutic shoeing for flexor tendons therapeutic shoeing for the suspensory Shoeing For Tendon And Ligament Injuries