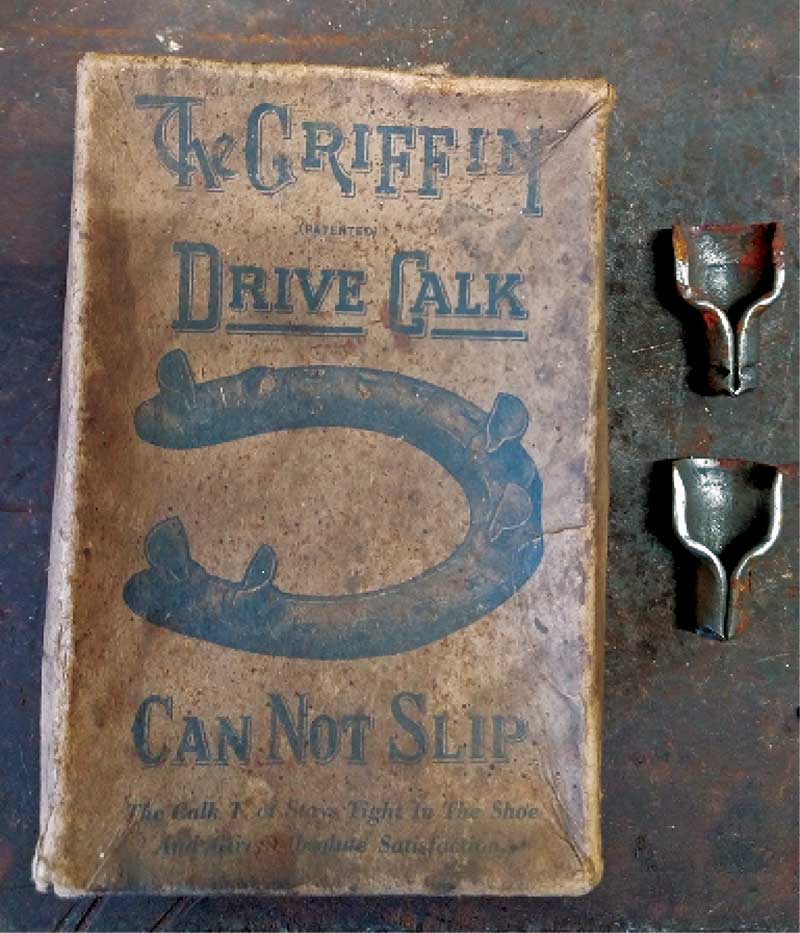 When a horse needs traction today, farriers have quite a few options to choose from — Borium, Drill Tek, pins, studs and, of course, calks.

Today, farriers often drill and tap shoes for horses in competition. While screw-in calks are most commonly used, convenient options such as the Klick and Ride stud system have been developed so a rider, trainer, or groom can easily and quickly install and remove studs with a hand-held tool. It was a different story 100 years ago.

People depended on horses in the 19th and early 20th centuries to live their daily lives, which required those living in colder climates to install calks such as those that Verbank, N.Y., farrier Buzzy Clina has accumulated during his 60-year shoeing career.

The Griffin Drive Calk measures 5 ¼ inches long x 3 ½ inch wide and 2 ½ inches high. The caulks were applied to shoes to prevent slipping on ice and snow. It was patented June 20, 1918, by Michael J. Griffin of Hartford, Conn., and manufactured by Capewell.

“The method of forming horseshoe calks that consists in bending a sheet-metal blank of substantially uniform thickness throughout into a spur of curved shape in cross-section and trough-like shank with divergent shoulders between said spur and shank, and then bending the shank into tapered tubular shape and simultaneously forming said shoulders at substantially right angles to the shank,” according to the Dec. 9, 1919, Official Gazette of the United States Patent Office.

While this is not a hoof-related question, several clients are wondering whether hay or grain should be fed first to their horses.

My farrier says one of my horses has hoof horn that is brittle and easily chipped or split. How can I correct this situation?

To Shoe Or Not To Shoe