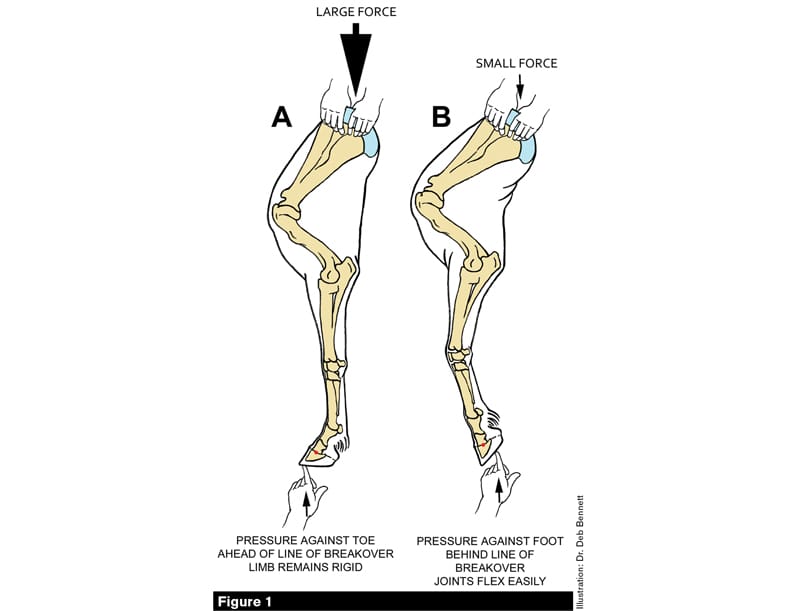 Hoof Trim has Varied Effects on the Equine Forelimb

Pictured Above: Wet lab demonstration of the functioning of the forelimb reciprocating apparatus.

Throughout this series, I have illustrated the concept of systems anatomy. Veterinary education and that of traditional farriers are based on regional anatomy, which studies regions and the anatomical components of each. The perspective of systems anatomy is that bodies are organized hierarchically, i.e. building up from small functional units (for example, cells or single tissues) to subsystems (for example, organs), which work together to make up a major system such as the nervous, circulatory or musculoskeletal system.

As I explained earlier in this series, I was not trained as a veterinarian, but as a biologist specializing in vertebrate paleontology. The anatomy training I received in graduate school was systems-oriented and it covered a much broader array of animals than are studied by any veterinarian, even one who intends to specialize in treating zoo animals, birds, or exotics.

In this article, I present a lab demonstration, a fun example of therapeutically useful horse-training, and several real-life examples meant to stimulate your thinking. When one part of the forelimb reciprocating apparatus is rendered nonfunctional…

Premium content is for our Digital-only and Premium subscribers. A Print-only subscription doesn't qualify. Please purchase/upgrade a subscription with the Digital product to get access to all American Farriers Journal content and archives online.
KEYWORDS breakover Equine Podiatry lowering the hoof angle optimum hoof angle raising the hoof angle

[Video] Study Of The Effects On The Sole And Frog