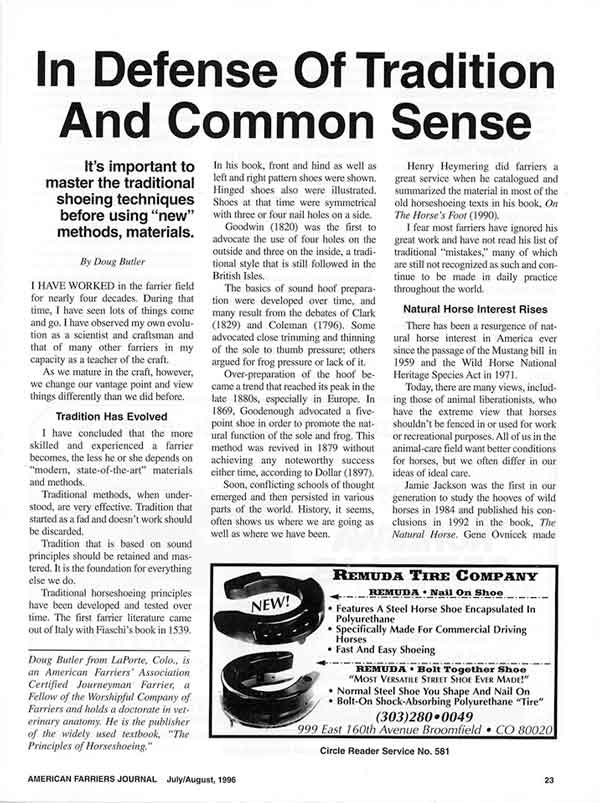 Years of study, practice and experience are necessary before a shoer is skilled

Pictured Above: Dr. Doug Butler’s article “In Defense of Tradition and Commons Sense” in the July/August 1996 issue of American Farriers Journal  emphasizes mastering traditional horseshoeing techniques before relying on new methods and materials.

Tradition that is based on sound principles should be retained and mastered. It is the foundation for everything else we do.”

Dr. Doug Butler, a member of the International Horseshoeing Hall of Fame, wrote those words nearly a quarter-
century ago in an American Farriers Journal  article titled “In Defense of Tradition and Common Sense.” In the wide-ranging article, the Crawford, Neb., farrier who owns and operates the Butler Professional Farrier School with his sons Jacob and Peter, emphasized the importance of mastering the traditional horseshoeing techniques before using “new” methods and materials.

“There are some things that have changed, but the concept that the article addresses hasn’t,” Butler tells American Farriers Journal  after recently reflecting on the article.

The article remains as relevant as ever, he says, particularly because the thesis is largely ignored or diluted as a…

Premium content is for our Digital-only and Premium subscribers. A Print-only subscription doesn't qualify. Please purchase/upgrade a subscription with the Digital product to get access to all American Farriers Journal content and archives online.
KEYWORDS Doug Butler farrier clients pay for a horse’s needs farrier schools teach students how to be a good helper mastering the basics of farriery no shortcuts in mastering farriery

Is Cryptocurrency The New Frontier In The Farrier Industry?

Challenge The Most Important Tool Every Farrier Has

Industry Greats Rally To Ring The Anvil For Late Farrier