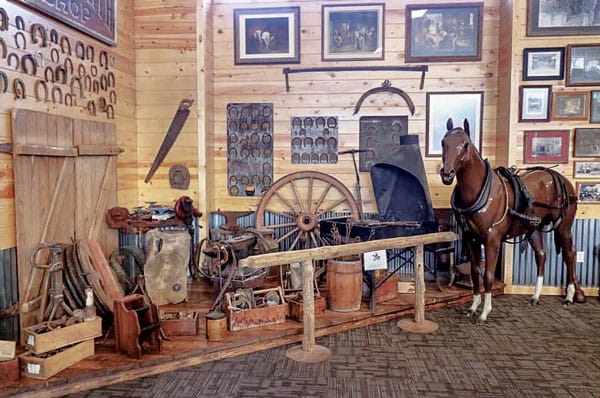 December 1, 2019 | Posted in Education, Equipment, Forging, Shoeing
Pictured Above: The heritage of farriery is preserved in the National Museum of Horseshoeing Tools and Hall of Honor, established by Lee Liles in the late 1990s.

The National Museum of Horseshoeing Tools and Hall of Honor is now open in its new location in the Historic Stockyards City, 2200 SW 13th St. in Oklahoma City, Okla.

“We are really thankful to everyone who has partnered with us thus far to help this happen,” says Samantha Liles Frank, daughter of the late Lee Liles, who was the museum’s founder and curator. “The opportunity to share the history of horseshoeing and the museum contents with a broader audience is truly what we think Lee would have wanted.”

The new space has been renovated with partners from Wiens Properties LLC, and features around 4,000 square feet of space. All of the content will be the same as the original museum, with some additional exhibits eventually being added.

The museum was established after Liles exhibited his collection of blacksmithing tools during the bicentennial celebration. The response inspired the long-time farrier to preserve his trade’s heritage and create the museum. Liles, who was the official farrier for four world championship horse shows for three different breeds, was inducted into the International Horseshoeing Hall of Fame in 2004. Liles passed away May 11, 2018, at the age of 68.